Everything you need to know about 3 April, “Punish a Muslim day” anonymous campaign 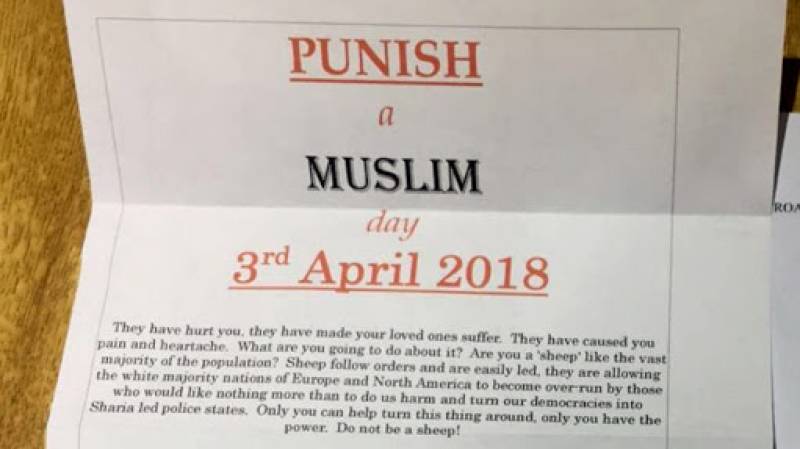 England- The rise in hate crime is not reducing anytime soon as people have now started anonymous online campaigns which provoke anti Muslims to step out of their homes and punish Muslims for practicing Islam. A flyer is going viral which encourages people to spread hate against the minorities. The flyer even describes a point systems like 10 points for verbal abuse, 1000 points for burning or bombing a mosque and 2500 points for nuking Mecca.

No one knows where you can redeem these points or who came up with this horrible flyer with bad font but people are not talking about “Punish a Muslim day” which is seen as major threat to the Muslim community especially in England. Violence against peaceful Muslims have started! These letters were received in Bradford, Lester, London, Cardiff and Sheffield.

Influential people are using their platforms to convey peace messages and to discuss the problematic hype of “punish a Muslim day”.

Racists in United Kingdom are going against humanity and laws to punish people who are just guilty of practicing their religion on this topic Hasan Minhaj a comedian was called on The Daily Show to talk about the situation, his response is hilarious.

Open conversations are taking place regarding this extremism:

However the world is not only about hate and crime as people have started to takeover internet to stand up with the Muslims supporting them for who they are on the basis of humanity. People have been sharing reaction flyers:

We pray and hope that our brothers and sisters living in London and North America stay safe but giving up by staying at homes won’t do any good. We all need to raise our voice against this modern oppression.