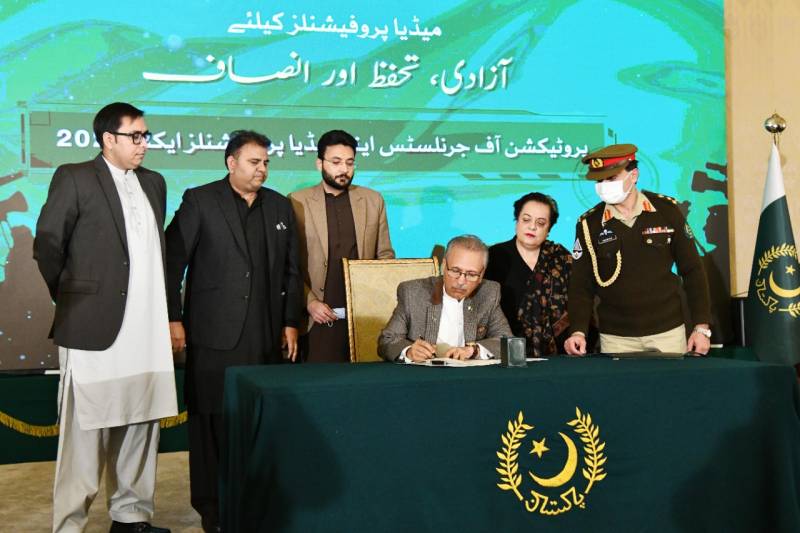 ISLAMABAD – President Dr. Arif Alvi has signed into law the historic Protection of Journalists and Media Professionals Bill 2021 that aims at protecting the rights of media community in Pakistan.

The bill, which was approved by the parliament last month, requires the government to take steps for protection of journalists and media professionals from all forms of harassment, abuse, violence and exploitation at the hands of any individual, institution or authority.

It also authorises the government to form a commission to probe complaints against threats, acts of torture, killings, violent attacks, enforced disappearances and arbitrary arrests.

Addressing the ceremony, President Alvi expressed his pleasure over the consensus developed on the important legislation. All people in the country are united for the rights of media community, he said, adding that the new bill has added to the responsibilities of both government and journalists.

The President explained that the bill also ensures the right to privacy and source non-disclosure and establishment of an independent media commission.

He added that journalist community should also present the stories in the right context, adding that the society should also show tolerance towards the media professionals.

The President expressed his concerns over the fake news, saying this poses a serious threat to the societies and the matter needs to be tackled effectively to avoid anarchy, Radio Pakistan reported.

Speaking on the occasion, Minister for Human Rights Shireen Mazari said that the bill for protection of journalists’ rights was finalized after hectic consultation with all stakeholders.

Addressing the ceremony, Minister for Information and Broadcasting Chaudhry Fawad Hussain termed the bill a great step that will provide rights to journalists available to the community in the first world.

He said the government is standing by the working journalists and the act provides employment protection to them.