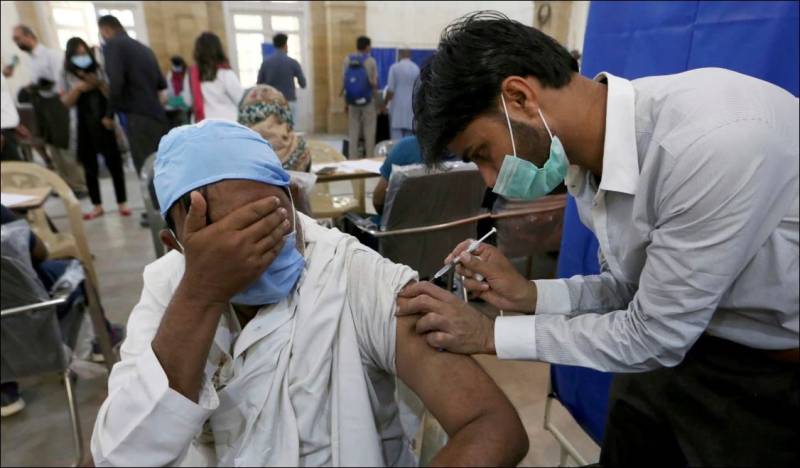 Reports in local media said that Pakistan’s top platform overseeing Covid response authorised booster shots for three groups of people including healthcare workers, those aged 50 and above, and people who are immunocompromised.

The booster shot will be free of cost, akin to basic inoculation, and it can be administered at least six months after the administration of the last dose. The person receiving the additional jab could choose from Sinopharm, SinoVac and Pfizer.

Plan to administer booster shot comes as NCOC efforts to prevent a fifth wave of novel disease in Pakistan in the wake of the emergence of a deadlier and fast spreading variant.

NCOC Chief Asad Umar said on Monday said omicron variant would eventually hit Pakistan in a few weeks. The vaccine is the only option to contain its fast spread, he said while adding that the government had already banned travel countries where Omicron cases had been reported.

In a similar development, provincial authorities in Sindh imposed new restrictions across the province in view of the new variant. Sindh home department has placed a limit on indoor dining at hotels at 50 percent in all districts of the province, except provincial capital – where it said the limit would be 70 percent.

Likewise, wedding gatherings of more than 300 people have been banned in Larkana, Mirpurkhas, and Hyderabad divisions, besides Khairpur and Ghotki districts.

KARACHI – The Civil Aviation Authority (CAA) has notified an updated travel advisory for incoming passengers amid ...

Furthermore, travel to tourist spots, amusement parks, swimming pools, and air travel will be subject to the Covid vaccine. Business centres had been told to close by 10 pm while educational institutions will remain open.

The more contagious variant of Covid, Omicron, was first reported to the World Health Organization (WHO) in South Africa less than a week ago and has already appeared in many countries, with borders shutting and dozens of governments imposing travel restrictions in defiance of WHO advice.

Existing Covid-19 jabs will struggle against the Omicron variant and it will take months to develop a new shot that ...