What happened at the Oscars Night? The 'Wrong Envelope' Disaster 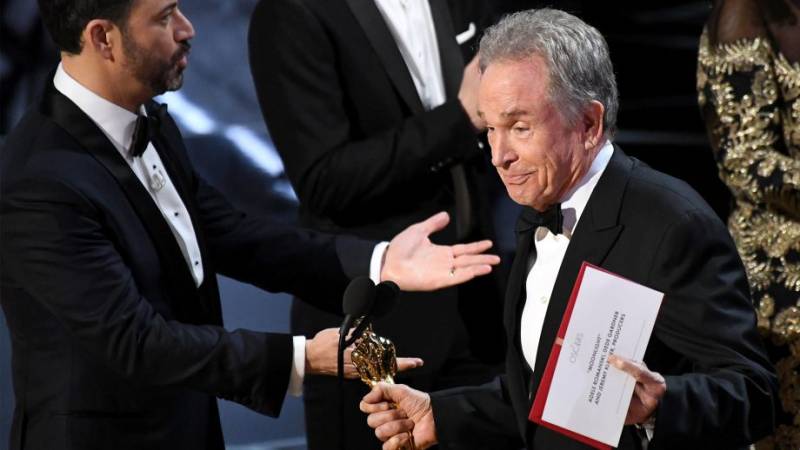 As we all know and might have heard of, the Oscars 2017 night ended in a debacle. What really happened with the La La Land-Moonlight Best Picture mix-up?

Well, now, we know exactly how..

It is reported by media that an accountant for the Academy Awards clumsily mishandled the very sensitive procedure for announcing the last and most biggest award of the Night.

PricewaterhouseCoopers (PwC) reported on Monday that accountant Brian Cullinan had been tweeting backstage just minutes before he handed out to presenters Warren Beatty and Faye Dunaway the wrong envelope for the Oscar for best picture, handing victory to La La Land before declaring Moonlight the real winner.

In a blunder that left the Dolby Theatre crowd in Hollywood and a television audience all around the globe in shock, "Cullinan mistakenly handed the backup envelope for Actress in a Leading Role instead of the envelope for Best Picture" to Beatty and Dunaway, PwC said.

"Once the error occurred, protocols for correcting it were not followed through quickly enough by Mr. Cullinan or his partner."

To confirm these sequence of events, the Wall Street Journal and TMZ reported that Cullinan had posted a backstage photo of Actress Emma Stone on Twitter just shortly before the infamous mix-up. 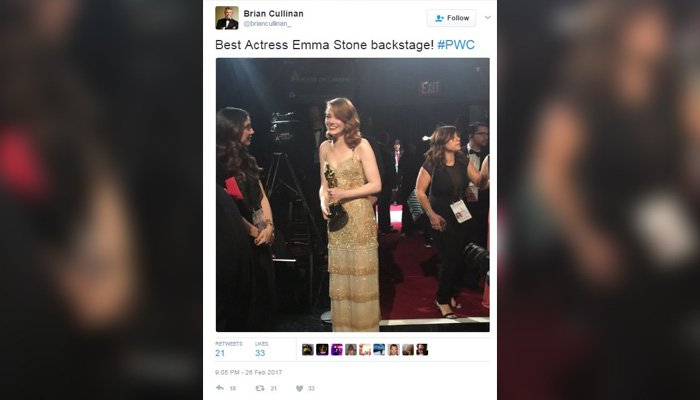 Though the photo was later deleted from Cullinan's Twitter account, it was still viewable on Monday on a cached archive of the page. For obvious reasons, Cullinan could not be immediately reached for a comment or a response.

The mistake was embarrassingly rectified only after the La La Land cast and producers were on stage acknowledging their so-acclaimed win and were half way through their acceptance speeches. Left to the musical's producer, Jordan Horowitz put things right by holding up the original card for the Best Picture winner Moonlight. 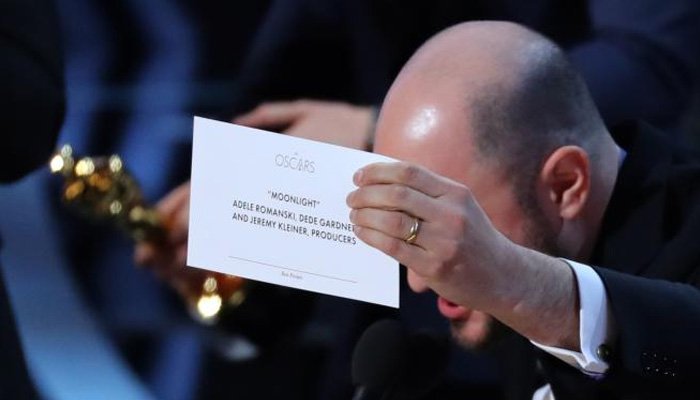 "Guys, guys, I'm sorry. No. There's a mistake," Horowitz said. "Moonlight, you guys have won best picture. This is not a joke."

Pricewaterhouse Coopers has been overseeing Academy Awards balloting for 83 years, and it took them three whole hours to initially confirm that Beatty and Dunaway had indeed received the envelope from the wrong category.

PwC took full responsibility for the mismanagement of events on Sunday night and apologized sincerely to the casts and crews of La La Land and Moonlight.

Brand management experts said that it could take years for PricewaterhouseCoopers to recover.

Tim Calkins, a marketing professor at Northwestern University, called the blunder a "bit of a branding strategy", stating that, "This is not advanced math. PwC had to get the right name in the right envelope and get it to the right person."

Organizers of the Oscars, the Academy of Motion Picture Arts and Sciences, also apologized for the accident and swore to commit to upholding the integrity of the Oscars.

It said in a statement, "We have spent last night and today investigating the circumstances and will determine what actions are appropriate going forward."

"You know it's a strange night when the word 'envelope' is trending on Twitter", said Jimmy Kimmel, who hosted the Oscars, on his ABC  talk show Jimmy Kimmel Live.