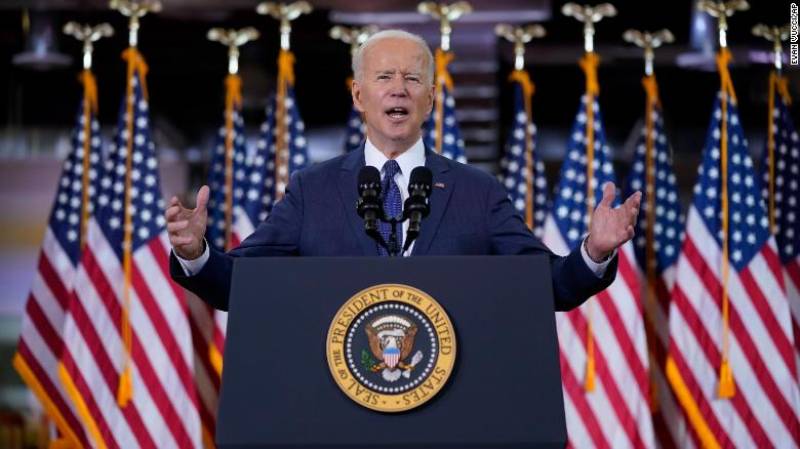 WASHINGTON – US President Joe Biden Tuesday termed the decision to exit from Afghanistan as the ‘best decision for America’, as he draws huge backfire after the Taliban's lightning conquest of the war-raked country.

In a televised address from the White House, the defiant Democratic party leader said “this is the right decision, a wise decision and the best decision for America” saying the “US had to end an era of major military operations in order to remake other countries”.

He addressed the nation after the US ends the 20-year-long war as the last American soldiers exit Afghanistan.

He addressed the nation less than a week after IS bombing killed 170 Afghans and 13 service members at the Kabul airport amid the chaotic evacuation.

He said the costs to the US would have been even higher if he had allowed the nation to remain mired for years in a 'never-ending' war that has dragged on for decades. Negating all backfire, he said the only alternative to the departure he oversaw was another escalation of the war.

He went on to say “When I hear we should have continued the so-called low-grade effort in Afghanistan, at low risk to our service members, at low cost. I don’t think enough people understand how much we’ve asked of the 1 percent of this country who put that uniform on”, he opined adding that “there’s nothing low grade or low risk or low cost about any war as it’s time to end the war in Afghanistan.”

There is nothing low-grade, low-risk, or low-cost about any war. It was time to end the war in Afghanistan. pic.twitter.com/jAGbWnBzol

US President said it's the “new era” of the use of American power in which the US would no longer seek to reshape its rivals in the way three previous presidents tried to do in Afghanistan and Iraq. He said that “the world is changing and that American leadership must change with it”.

However, neither the 78-year-year-old nor his aides conceded making any mistakes in the botched ending of the 2 decades-long war.

He also mentioned that “about 100 to 200” Americans who want to get out of the war-torn country were left behind when the final troops withdrew. Adding that, the US would continue to make diplomatic efforts to help them leave in the days ahead.

He also pledged to hunt IS-K, the offshoot of IS group in Afghanistan, that recently killed more than 170 Afghans including 13 US military members. “We are not done with you yet”, he added.

Earlier, former US President Donald Trump termed the exit as a ‘humiliating failure’, a defeat that outdoes even the 1975 evacuation from Saigon, and a signal to the world that the US has given up.