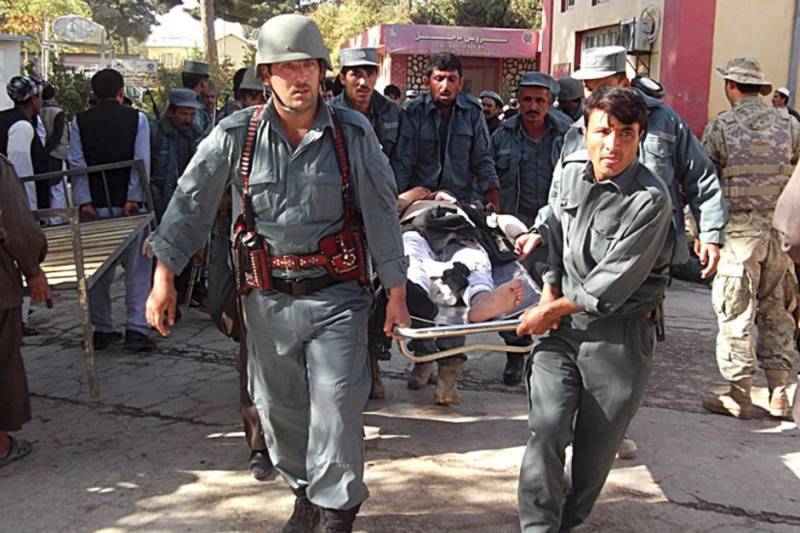 MATOON (Web Desk) - A suspected suicide bomber killed at least 10 people when they detonated their explosives in the midst of a demonstration in eastern Afghanistan on Thursday.

According to Mubarez Zadran, the spokesman for the governor of Khost province, Afghan MP Homayon Homayon was also among the 36 people injured in the attack.

He added that the number of casualties met increase.

The blast occurred during a demonstration against the provincial governor.

Also, an Afghan official says the police chief of a volatile district in the country's south was killed a roadside bomb on Thursday.

He says Akmal's car hit a bomb planted by insurgents on the road leading to the checkpoint.

A major military operation is underway to drive Taliban insurgents from the poppy-rich valley of the Helmand River.

The insurgents, fighting to protect supply routes and a major source of funding from the opium produced in the province, have stepped up attacks on police checkpoints and other government targets.

Opium production has been on the rise in Afghanistan over recent years despite US counternarcotics efforts. Infamous mercenary firm, formerly known as Blackwater, has creamed off $569 million from the Pentagon in this unsuccessful drive.

The money the company received from US tax-payers was used for “training, equipment, and logistical support” for Afghan forces engaged in counternarcotics operations. These agencies included the “Afghan National Interdiction Unit, the Ministry of Interior, and the Afghan Border Police,” says a report from The Special Inspector General for Afghan Reconstruction, or SIGAR, cited by the Guardian.

Formerly known as Blackwater, and later rebranded as Academi, the notorious company has been the biggest beneficiary of counternarcotics expenditure in the war-torn country.

However, the firm failed to eradicate opium production. In fact, this has reached record highs since the beginning of US occupation in 2001.