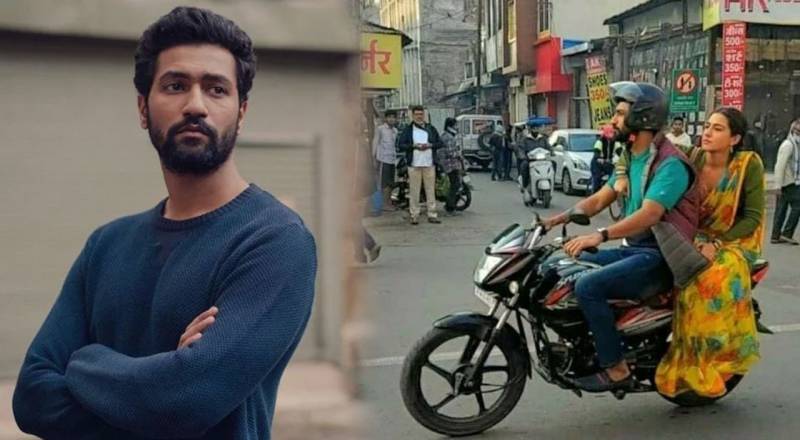 MUMBAI – Newlywed Bollywood actor Vicky Kaushal is in legal trouble for another time after roaming in Indore on a bike with a fake number plate.

Reports in Indian media said an Indore resident has filed a police complaint against the Lust Stories actor. The complaint was lodged after Vicky was spotted riding a bike on the streets of Indore for his upcoming project with Sara Ali Khan.

Sara and Vicky were shooting for their next film in the Indian state of Madhya Pradesh while a citizen Jai Singh Yadav has lodged a police complaint mentioning the alleged use of the number plate of a motorcycle in a movie sequence, he said the number plate is of the vehicle that belongs to him.

An Indian news agency quoting a local police official said that local cops received a complaint, and will see whether the number plate was misused.

We received a complaint, will see whether number plate was misused. Action to be taken as per provisions in Motor Vehicle Act. If film unit is in Indore, will try probing them:Rajendra Soni,SI,Banganga on an allegedly fake no. plate used in a movie sequence by actor Vicky Kaushal pic.twitter.com/laCIBbEWML

The tweet also mentioned that action is to be taken as per provisions in Motor Vehicle Act if the film unit is in Indore, will try probing them.

Bollywood star Katrina Kaif and Vicky Kaushal's wedding continues to make rounds on the internet. However, they have ...

The complainant termed the act as illegal, saying they cannot use my number plate without permission. I have given a memorandum at the station. Action should be taken in the matter, he added.