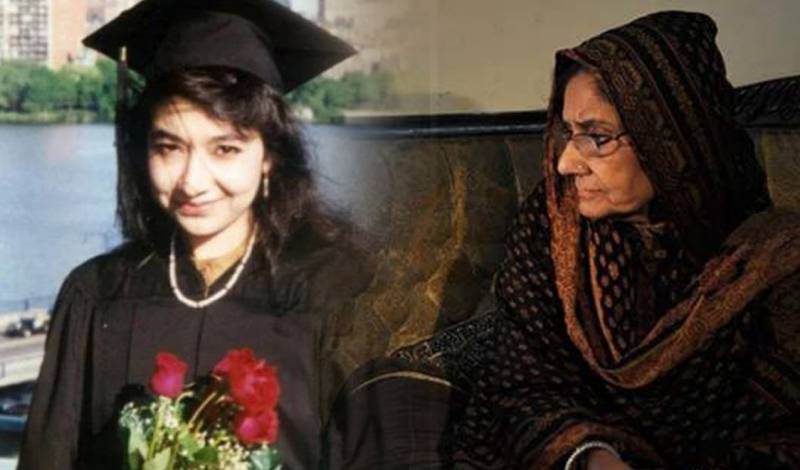 KARACHI – Ismat Siddiqui, the mother of Dr Aafia Siddiqui who is serving a jail sentence in an American prison, passed away in the country’s seaside metropolis Karachi on Saturday.

A spokesperson of Aafia Moment told local media that her funeral prayers will be offered today after Isha prayers at Madina Mosque in Gulshan-e-Iqbal while burial will take place at Nabat Chowk Gabol Cemetery.

Earlier this week, Dr. Fauzia Siddiqui appealed to the nation to offer special prayers for the recovery of her mother.

May Allah SWT rest her soul in eternal peace.

Last week, the Islamabad High Court (IHC) directed the Ministry of Foreign Affairs to facilitate the family of Dr Aafia Siddiqui, who is serving a jail term in US, in acquiring US visa.

Dr Aafia, a graduate of MIT, was arrested by the US forces for her suspected links to Al Qaeda and was given an 86-year sentence in 2010 for attempted murder. She is serving this sentence at the Federal Medical Center (FMC) Carswell in Texas.

Shortly after the arrest of alleged 9/11 architect Khalid Sheikh Mohammed, whose nephew Siddiqui was married to, Dr Aafia and her three children disappeared in the port city of Karachi.

Five years later, she appeared in neighbouring Afghanistan, where she was arrested by local forces in the restive southeastern province of Ghazni and later handed to US forces who questioned her.

It is unclear where Dr Aafia was between her 2003 disappearance in Pakistan and her 2008 reappearance in Afghanistan, with her supporters claiming she was the victim of a secret Pakistan-US plot.

At her trial in New York in 2010, she said she was detained for a "long time" in a "secret prison" in Afghanistan. Her supporters said she was the "ghost prisoner" in Bagram, serial number 650, but this is denied by the US.