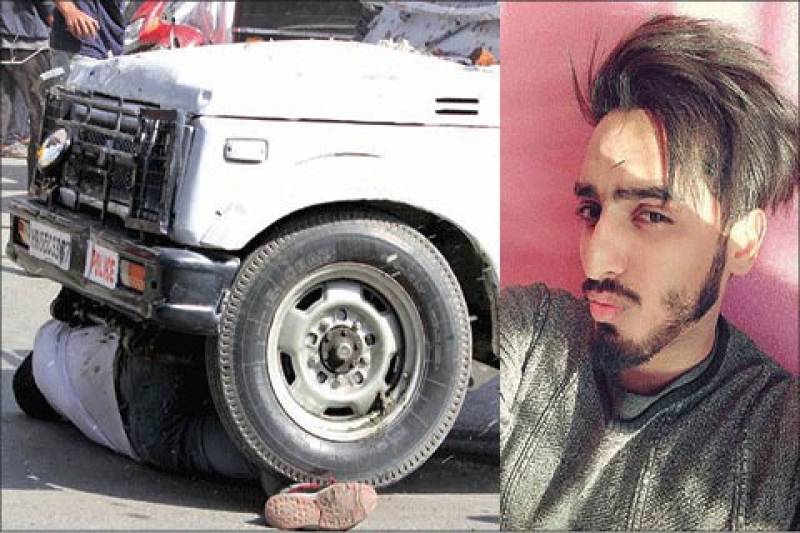 SRINAGAR - A youngster was crushed to death while another sustained injuries after a vehicle of Indian paramilitary force ran them over in Srinagar on Friday.

According to Kashmir media Service, the Central Reserve Police Force (CRPF) vehicle knocked down two boys as it sped by a group of protesters who had gathered outside Srinagar’s Jamia Masjid at Nowhatta.

The Kashmiris were staging a demonstration against the desecration of the grand mosque by the Indian police when the tragic incident happened, riling the locals of the restive region.

According to eyewitnesses, the boys, identified as Younis Ahmed and Qaiser Butt, were rushed to a hospital where the latter succumbed to his injuries.

The incident sparked a wave of protests against Indian atrocities in the occupied valley, as images of the deceased being overrun by the vehicle stumped the social media.

SRINAGAR - As many as five Kashmiri youth were martyred as Indian troops unleashed a fresh spasm of violence in ...

The deceased had been living with his aunt and sisters in Dalgate area of Srinagar for the past four years following the death of both his parents. He is survived by two teenage sisters and had recently started Kashmir art business.

Earlier, last month, a man was killed when Indian forces’ vehicle deliberately drover over him during clashes in Safa Kadal area of Srinagar in Occupied Jammu and Kashmir.

The deceased identified as Adil Ahmad can be seen throwing stones at occupant forces during a protest in the video when an armoured vehicle mowed him down, leaving severely injured.

Kashmiri protestor Adil Ahmad Yadoo being murdered by Indian occupation forces. He was run over by CRPF van in Safa Kadal area of srinagar, occupied #Kashmir

The Indian authorities unleashed a fresh spasm of violence despite the fact hat a ceasefire had been announced in the valley for the month of Ramazan.

According to data released by the Kashmir Media Service, Indian troops, in their continued acts of state terrorism, martyred 31 Kashmiris including a woman and six young boys during May 2018.

During the period, 314 people were injured due to the use of brute force including firing of bullets, pellets and teargas shells by the Indian army, paramilitary and police personnel on peaceful protesters.