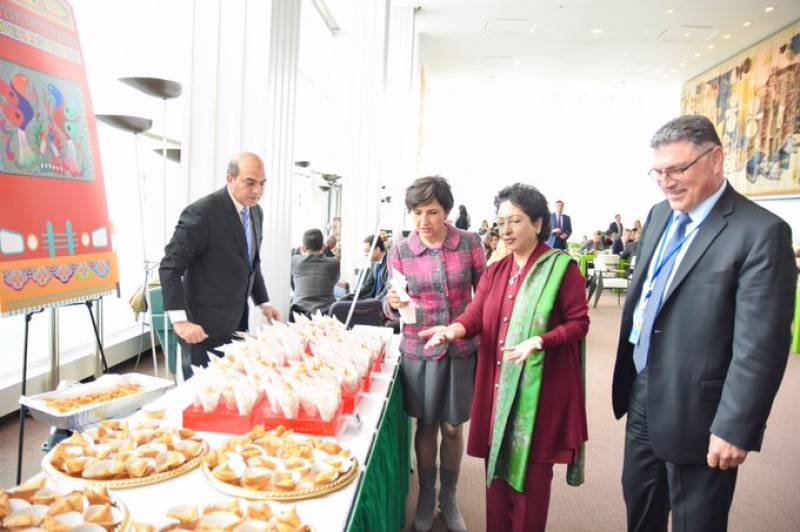 Ambassadors from many countries, UN officials and diplomats thronged the Pakistan food stall which was adorned by Truck Art to also reflect the theme of Pakistani street food.

“The UN provides a unique platform to promote Pakistan’s soft power,” said Ambassador Lodhi and added “and that includes our cuisine which is quite distinctive and yet familiar to many people”.

The ‘street cuisine’ offered at the largely attended event included samosas, namak paras and bun kababs, which were billed as desi sliders.

The Mission had also displayed colourful standees and infographics decorated with motifs and patterns from Pakistani Truck Art.

It was a pleasure for us that the Ambs of Canada and Morocco also joined us to taste Pakistani cuisine at the UN @blanchardCanada pic.twitter.com/X24i9sZWwA

Diplomats from around the world showed keen interest in the quintessential Pakistani take on art used to embellish trucks and lorries.

While many had heard about this art-form, seeing it illustrated at the UN along with traditional street-food from Pakistan fascinated the attendees. Many were seen taking photographs of the standees.

The event was part of a series of projects and initiatives that have been undertaken by Pakistan’s Mission to the UN under the leadership of Ambassador Maleeha Lodhi to showcase the rich cultural heritage and diversity of the country.

Team Pakistan after our Pakistani street food event at the UN. Thanks to all members of the team for helping with this event ! pic.twitter.com/oZAn3umA5b

By fusing truck art and street food in a single event, the Pakistan Mission sought to project two classic cultural aspects of Pakistan.

Ambassador Lodhi and other officers of the Mission mingled with the guests and explained the food items which were much appreciated and enjoyed during the lunch hour on a busy day at the UN.