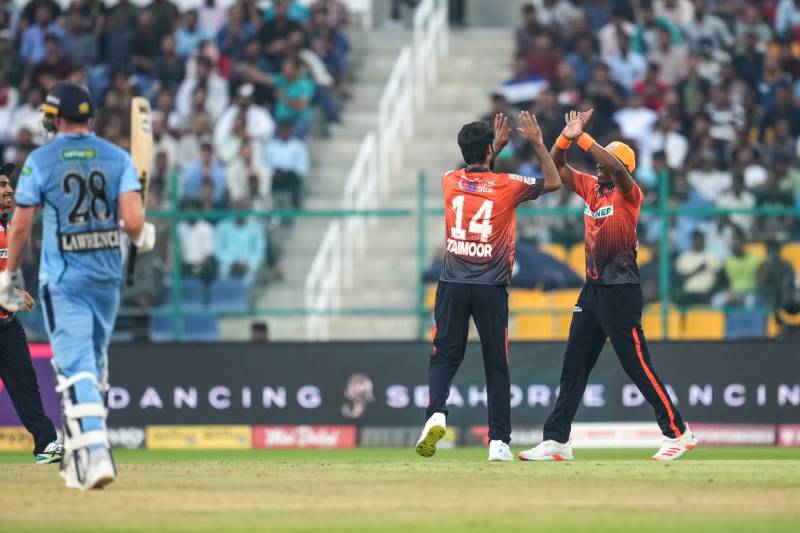 A deadly spell of four wickets for eight runs from Mohammad Taimur bowled Delhi Bulls to a 31 runs win over The Chennai Braves in the 26th match on the tenth day of the Abu Dhabi T10 at the Abu Dhabi Zayed Cricket Stadium on Friday. Delhi Bulls had posted a challenging 119 for 4 in 10 overs. Taimoor’s spell resulted in Chennai Braves being able to post only 88 for 7 in 10 overs.  Chennai opener Dan Lawrence's knock of 45 went in vain.

Delhi Bulls won the toss and elected to bat. Opener Rahmanullah Gurbaz began promisingly hitting Patrick Dooley for a six to mid-wicket off the second ball and also the fourth ball over backward square leg for another six. Dooley struck with the last ball clean bowling Gurbaz for 12.

Banton joined Rilee Rossouw and hit the last ball of the second over from Sam Cook for a boundary to long off. Banton also picked a boundary off Sikandar Raza’s last delivery of the third over. In the fourth over, Banton hit Sabir Ali’s second delivery  for a six to mid-wicket and the third for a boundary. Rossouw hit three consecutive sixes off Henry Brookes in the fifth over but perished to the last ball, trapped leg before for 26. At the half way mark Delhi Bulls were 68 for 2.

The sixth over saw the end of Banton’s knocks when Cook got him out caught by Sikandar Raza at mid-on for 35. His knock off 17 balls had four boundaries and one six. Sikandar Raza tightened the run flow by bowling a fine seventh over giving away just eight runs.

Tim David hit James Fuller over mid-wicket for a six. The next he square drove to backward point fence. He also got a boundary to third man. These hits took Delhi Bulls past the 100-run mark.  The ninth over was Najbullah Zadran’s chance to accelerate the run flow but Carlos Brathwaite prevented him from going for any big hits. Brathwaite gave away only four runs from the ninth over.

The last over from Fuller began with two consecutive wide deliveries. The remaining deliveries were bowled tightly and he even got David out for 12. David hit 22 runs off 12 balls before getting caught by Dooley at sweeper cover. Zadran smashed the last delivery through the covers for a boundary and remained unbeaten on 13 to help Delhi Bulls post 119 for 4 in 10 overs.

Daniel Lawrence and Kobe Herft began Chennai’s chase to the target. UAE’s young left-arm spinner Aayan Afzal Khan opened the attack for Delhi and Lawrence picked two boundaries off that over. Fazalhaq Farooq bowled a brilliant second over giving away just four runs.  Lawrence hit Aayan Khan’s first delivery for a six over the bowler’s head. He also hit the last delivery for a boundary. The fourth over from Michael Stanley was also tight except for Lawrence slicing the fourth ball for a boundary to third man.

Mohammad Taimur struck with the first ball of the fifth over by clean bowling Herft for 9. Carlos Brathwaite hit Taimur for a straight boundary but fell to the next caught and bowled for 4. One ball later Taimur also removed James Fuller caught by David at long-on for 2.

At the half way mark, Chennai Braves were struggling at 48 for 3. Skipper Dwayne Bravo who introduced himself was hit by Lawrence for a straight boundary off the first ball but he gave away just four singles and a double from the rest of the five deliveries.

Taimur picked his fourth wicket removing Michael Pepper who top edged to Gurbaz for 5. Lawrence too followed caught behind by Tom Banton off Bravo for 45.

Taimur’s superb spell made it tough for Chennai as they needed to score 49 runs from the last two overs. Vriitya Aravind with his skipper Sikandar Raza were at the crease.  Aravind hit Fazalhaq for a boundary off the first ball past point and also hit the fourth ball for another boundary. It reduced the required runs to 39 off the last six balls.

Raza hit the first ball of the last over from Stanley  for a boundary but fell to the second ball hitting high to Gurbaz at long on for 7. Bravo pulled off a brilliant catch at square leg off to get Henry Brookes out to the fifth ball of the match from Raza and go on to win the match by 31 runs.

Player of the Match: Mohammad Taimur