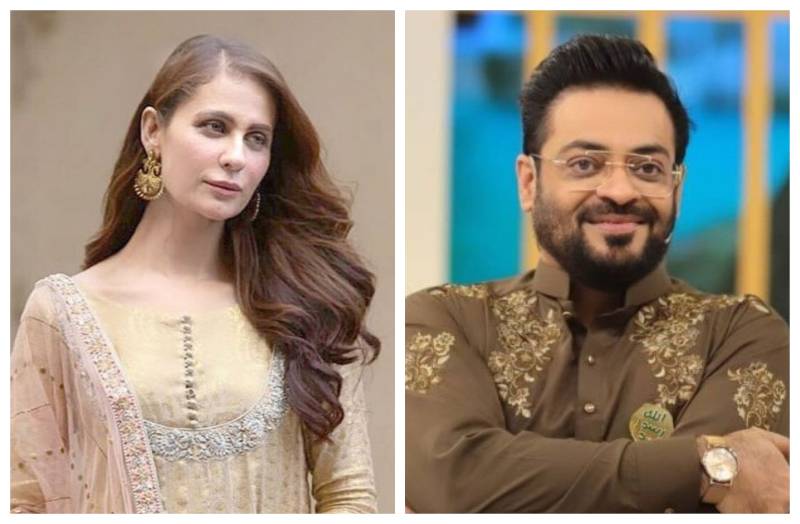 Nausheen Shah has proved her versatility onscreen with her gorgeous looks and strong screen presence but one thing that people downright adore about her is her ability to call spade a spade.

This time around too the fiery star did not hesitate from voicing out her opinion as she stated she is fed up with Dr Aamir Liaquat's antics and bickering.

Throughout the show, Shah was pretty active and in an extremely joyful mood. But she soon ran out of patience and got angry and one thing led to another as the situation got super awkward.

At the end of the show, Nausheen was trying to give her statement on something but Dr Aamir Liaquat kept on interrupted her many times which annoyed her.

Shah was bothered over constant interruption and scolded Dr Aamir Liaquat Hussain saying, “Listen, Dr Sahab, O My God you talk nonstop and don’t listen to the other person at all and that’s what I am fed up with”.

On the work front, Shah is being praised for her performance in the drama serial Pehli si Muhabbat.

Unfortunately, humour nowadays is based on cringe-worthy acts and jokes. Earlier, Saboor Aly refused to entertain Liaquat’s antics. Aamir Liaquat kept teasing her throughout the show. But for every taunt, Liaquat threw her way Aly had a stronger comeback.

Saboor Aly never shies away from confrontations and her latest interaction with Dr Aamir Liaquat is proof of her fiery ...