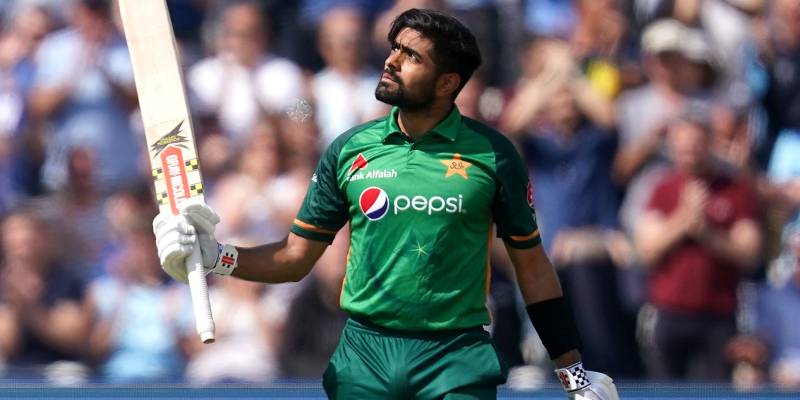 The 27-year-old’s two successive half-centuries in the ongoing ICC tournament and three in four previous matches have helped him overtake England’s Dawid Malan and grab the No. 1 position.

King Babar is back on 🔝 of ICC Men’s T20I Batting Rankings! pic.twitter.com/g0hrTj0x6Y

Azam, who recently scored 51 against Afghanistan and 70 against Namibia to lead the 2009 champions into the semifinals, is at the top of the ranking for the sixth time in his career. He first attained the top position on January 28, 2018. He is also currently ranked No. 1 in ODIs.

Sitting at number 2 in last week's rankings, Pakistani skipper moved up 14 points pushing past English batter. Green Shirts have made the ideal start to the ICC cricket carnival – winning four consecutive games in style with Babar at the helm.

The right-handed batsman first got the feat earlier in 2018 while he currently holds top rank in One Day Internationals. The Pakistani star batter’s tally of 834 rating points puts him 36 points ahead of English cricketer while his career-best remains 896 rating points.

Pakistani skipper while reacting to the recent feat said It is a good little motivation to be back on top of the T20I rankings. But the bigger picture is these performances have helped Pakistan to rise to No.2 and become the first side to qualify for the semifinals of the ICC Men’s T20 World Cup 2021.

Meanwhile, team Green is now on 265 points, while arch-rival India slipped to 262 points after consecutive defeats against Pakistan and New Zealand. England led the field with 279 points.

Pakistani left-handed all-rounder Imad Wasim has also jumped 10 places to 26th while Hasan Ali advanced four places to 63rd on the bowling side.

English batter Malan has been at the top of the ICC ranking since November 29 last year as Jos Buttler and Jason Roy moving up in the latest weekly update following top performances in the tournament.

England’s vice-captain gained eight slots to reach a career-best ninth position after smashing a ton against Sri Lanka, while Roy advanced five places to 14th. Furthermore, Lankan player Wanindu Hasaranga for the first time topped the bowling charts after two wins against Proteas and England. He dethroned Tabraiz Shamsi – who was at the top since 10 April this year.

Other big movers include Proteas’ Anrich Nortje (up 18 spots to 7th), teammate Dwaine Pretorius (up 65 spots to 34th), and Shoriful Islam of Bangladesh, leaping 77 places to 38th.

DUBAI –Pakistan on Friday got the second position in ICC T20 Rankings, pushing India to third slot. According to ...