UK wants to engage with Taliban 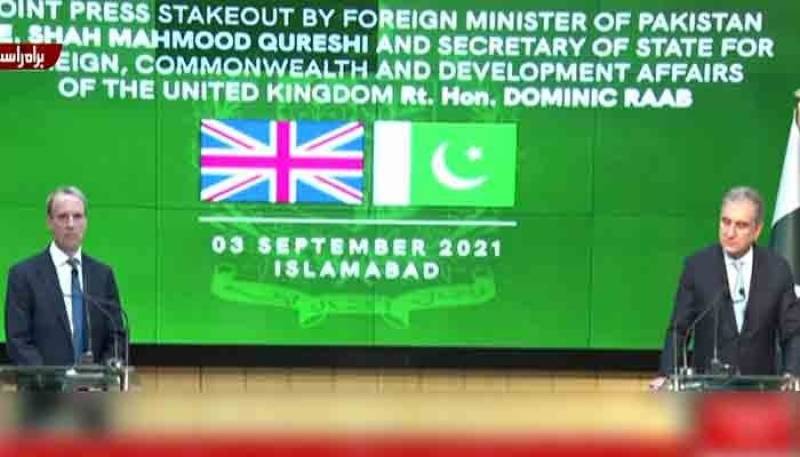 ISLAMABAD – United Kingdom Secretary of State for Foreign, Commonwealth and Development Affairs Dominic Raab on Friday signalled the UK’s intent to engage with the Taliban government in Afghanistan.

He was addressing a joint press conference with Pakistan Foreign Minister Shah Mahmood Qureshi in Islamabad.

Raab said it would not have been possible to evacuate some 15,000 people from Kabul without some degree of cooperation with the Taliban, who seized Kabul on August 15.

“We do see the importance of being able to engage and having a direct line of communication,” he said.

Foreign Minister Qureshi said that through such dialogues with the British government representatives, Pakistan upgrades its relations with the UK to a higher level.

He said Pakistan had made “tremendous progress” on getting out of FATF’s grey list. “We have taken legislative steps, administrative steps, and concrete steps that are being taken,” he said.

FM Qureshi said he discussed Pakistan’s name on the UK’s Red List, adding that he told the British foreign secretary how people in Pakistan felt about it and “what needs to be done to take Pakistan’s name off the Red List and into the Amber List.”

“On the whole, it was a frank and candid discussion. Thank you for coming,” concluded the foreign minister.

The foreign minister said he is happy that a meeting has been arranged between Dr Faisal Sultan and British authorities on Monday in which he would suggest ways in how “both sides can be comfortable and overcome this challenge.”

Speaking after the foreign minister had concluded his opening statement, Raab said that the UK valued its historic relations with Pakistan, adding that he had a positive and constructive discussion with FM Qureshi.

“We want to further strengthen our ties with Pakistan,” he said.

He thanked Pakistan for safely evacuating British citizens from Afghanistan, adding that the UK will continue to provide aid to Afghanistan on humanitarian grounds.

“We will continue to help Afghanistan’s neighbouring countries, including Pakistan,” he vowed. “We want to see a prosperous Afghanistan.”

Speaking about Pakistan’s inclusion in the Red List, Raab said Dr Faisal Sultan would hold a meeting with UK authorities to discuss the technical aspects of the case.