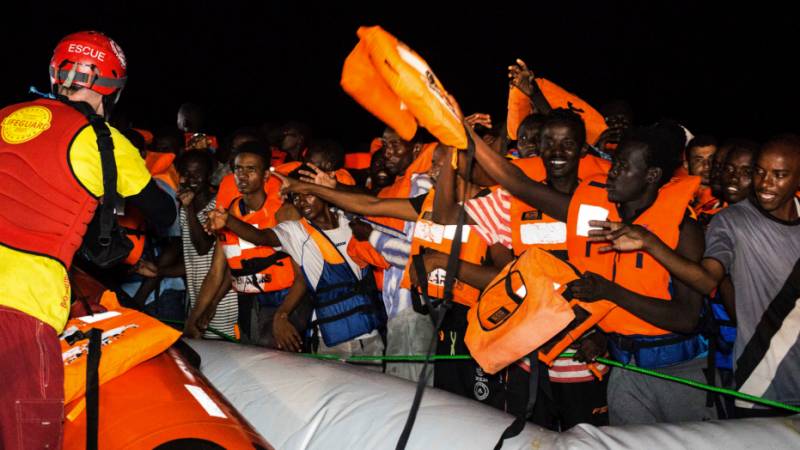 MADRID - Spanish Prime Minister Pedro Sanchez said the government would set up a command center to coordinate Madrid's response to the migrant influx.

The announcement came as Spain has overtaken Italy this year as the destination of choice for migrants seeking a better life in Europe with a crackdown by Libyan authorities making it more difficult for them to reach Italian shores.

Over 23,000 people have arrived by sea so far this year with 307 dying, according to the International Organization for Migration -- more than during the whole of last year.

Sanchez said the center would be staffed by security forces and emergency services personnel.

He said that 30 million euros ($35 million)would also be spent by the end of the year on an "emergency plan" to boost the number of places available in migrant reception centers and improve the assistance offered to migrants who did arrive.

"The timely transmission of information" should make it possible "to cooperate better to prevent the departure of boats from the countries of origin and prevent the impromptu arrival of boats in Spain," he told reporters following a weekly cabinet meeting.

In recent days migrants rescued by Spain's maritime rescue services have slept outdoors in the southern port of Algeciras due to a lack of space in migrant reception centers.

At the same time, the European Commission said it had awarded Spain nearly 30 million euros in emergency assistance to help Madrid cope with the surge in migrant arrivals -- 25.6 million which was awarded on July 2 and a further 3.0 million euros granted on Thursday.

Sanchez said his government would also step up its talks with Morocco, from where traffickers take the migrants across the Mediterranean, saying the country is "key for the management and control of migratory flows".

In a joint statement the European Commission and Spain "underlined the importance of an enhanced partnership with Morocco and the need to intensify European support and cooperation with Morocco on migration."

This includes the "speedy delivery" of a 55-million-euro border management programme approved for Morocco and Tunisia, the statement added.

But the availability of this aid is in doubt as European Commission chief Jean-Claude Juncker wrote to Sanchez on July 26 since several member states have not paid their contribution to an EU Emergency Trust Fund for Africa from where the money will come from.