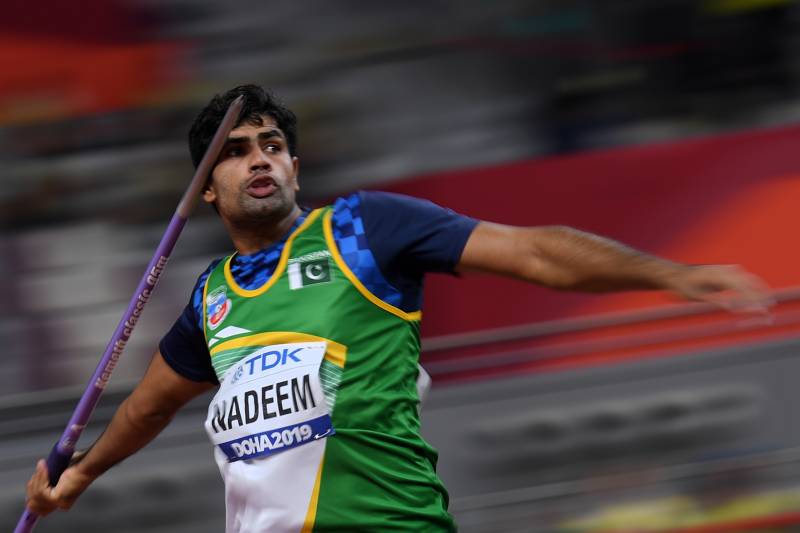 TOKYO – Pakistan’s Arshad Nadeem on Wednesday etched his name in history books as he qualified for the final of the men's javelin throw competition at the Tokyo Olympics.

Congratulations to Arshad Nadeem 🇵🇰who finishes No.1 in the qualifying round with a massive throw of 85.16m and qualifies for the finals of the #JavelinThrow event at #Tokyo2020. pic.twitter.com/ulmhIpv0Tl

Pakistan’s last surviving athlete in the Olympics 2020 is the first-ever Pakistani athlete to qualify for the final of any track and field event in the Olympics.

Earlier, the Mian Chunnu based athlete threw the javelin to a distance of 86.39m for his personal best and a national record during the Imam Reza championship in Iran. He also threw 86.29m at South Asian Games in Nepal.

Now as he qualifies for the final, Arshad now has his eyes on a medal as he’s being considered as a potential hope to bring gold for Pakistan. His opponents will be Neeraj Chopra from arch-rival India and Germany’s Johannes Vetter.

Pakistani athlete has requested the nation to pray for his success in the mega sports competition. Speaking in a video message, he said that he qualified for the final round in the javelin throw competition by the grace of Almighty Allah and thanked the nation for their prayers and support.

He vowed that he will perform his best in the final round and hoped that he would succeed to get a medal for Pakistan.

Arshad got huge applaud as he is different from most of his competitors. Most of them have access to world-class training facilities and top instructors while Arshad's training has taken place in his hometown by a local coach. Earlier this year, the young athlete, contracted COVID and battled it successfully.

Congratulations Arshad Nadeem for qualifying for the medal round at #Olympics Arshad is considered to be one of the finest javelin throwers in South Asia. His personal best - a throw of 86.38 - is among of the top 10 throws of the season. Wish you all the best @Arshadnadeem76 pic.twitter.com/ksh6oqXC1l

Meanwhile, nine out of 10 Pakistani athletes have failed to win any medal in Tokyo Olympics 2020 until now. Arshad in the finals, eyes breaking the country’s 45-year-old metal-drought as Pakistan took the last medal in the 1976 Olympics.

Five out of ten Pakistani athletes taking part in Tokyo Olympics 2020 were eliminated without any medal as they failed ...