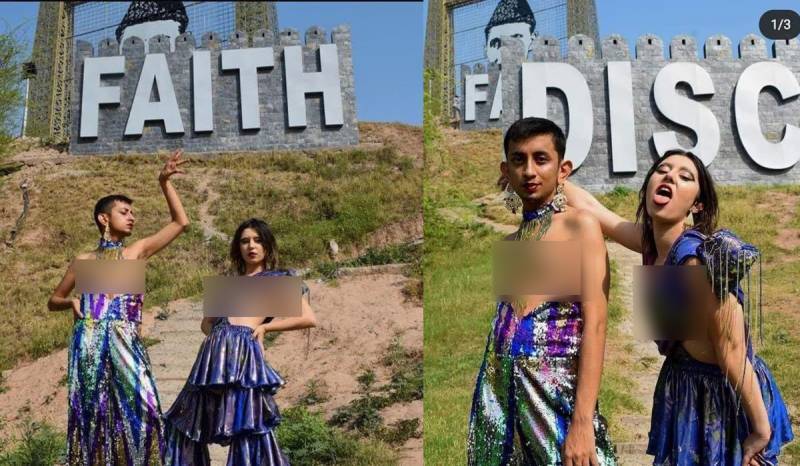 ISLAMABAD – Federal law enforcers have lodged a case in Coral Police Station against the members of Mystical Shayari band who had an obscene photo shoot in front of the portrait of Quaid e Azam near Express Highway Islamabad.

The case has been registered on the complaint of a citizen named Rashid Malik. The FIR stated that the duo had taken pictures in revealing dresses in front of the portrait of the country’s founder Quaid-e-Azam and had also made them viral on social media.

Meanwhile, federal cops have launched further investigations to find the couple involved in the photoshoot that triggered the nationwide outcry.

Earlier, senior journalist Ansar Abbasi also took to Twitter where he tagged the DC Islamabad and asked for the couple to be arrested for spreading obscenity. DC Islamabad then urged people to inform authorities about any kind of information about the duo.

Anyone with any information may plz share with us https://t.co/nrRvD9cRky

As the pictures went viral, #Islamabad became a trend on microblogging site Twitter, and it divided the social media users who slammed them for spreading obscenity and mocking the country’s founder while others termed it freedom of expression.

ISLAMABAD – Pictures of an obscene photo shoot in front of Quaid-e-Azam portrait in Islamabad distressed federal ...

Reports cited that soon after the event breaks the internet, the band members deleted their Instagram citing vulgar and threatening messages. The couple said they posed for the photos in a bid to ‘exercise their right to express themselves.’