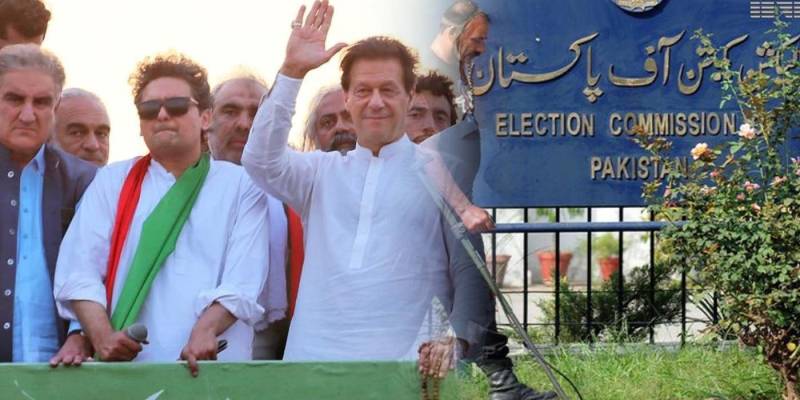 ISLAMABAD – Lawmakers of PTI barged through barbed wires and barricades and registered their protest outside the Election Commission office in the federal capital, however the agitators faceoff security personnel at the headquarters’ gate.

The development comes as PTI chief Imran Khan announced a peaceful public protest outside the ECP building situated in the red zone, later the defiant politician announced a change of venue and they will now stage a protest at F9 Park around 6pm today.

Imran Khan took to Twitter, where he called on the masses to come out in peaceful public protest against CEC and ECP in F-9 Park at 6pm. Imran said he will address the gathering between 7pm and 7:30pm.

Today I am calling all our people to come out in peaceful public protest against CEC & ECP in F9 Park at 6 pm. I will be addressing the gathering between 7:00 - 7:30 pm.

It was reported that at least 2,000 personnel of police, Frontier Corps, and Rangers, have been deployed in the capital and Section 144 has been imposed in the Red Zone.

On Wednesday, the country’s security chief Rana Sanaullah warned PTI leaders of strict action if their party workers tried to barge into the Red Zone as the incumbent government denied permission for holding a protest outside the ECP.

PTI took to the streets after the ECP announced the verdict on the prohibited funding case, which was previously referred to as the foreign funding case.

ISLAMABAD – Authorities have place containers at entry points of the capital city and sealed the red zone as the ...

The commission revealed that PTI took funds from 34 individuals and 351 businesses including companies, adding thirteen unknown accounts that have also come to light, which according to ECP are a violation of Article 17 of the Constitution.

ISLAMABAD – A number of dual nationality holder Pakistanis have raised objection over a verdict of the Election ...