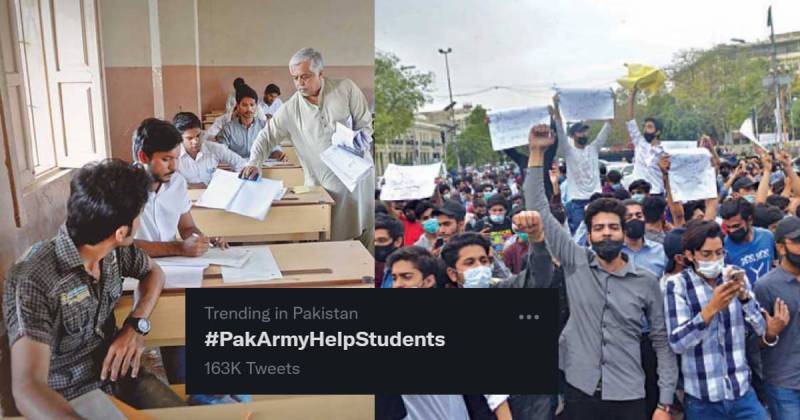 LAHORE – As matric and intermediate board exams are around the corner, Twitter is flooded with tweets from students who are requesting the Pakistan Army to intervene and have the exams cancelled.

Students of all boards have demanded that top army officials discuss the matter with the education ministry and the National Command and Operation Centre since the federal education minister and other relevant authorities have turned down their requests to cancel the exams.

In an online campaign, #PakArmyHelpStudents, which is trending with more than 125,000 tweets, students have asked Chief of Army Staff Gen. Qamar Javed Bajwa and ISPR DG Major General Babar Iftikhar to intervene and settle the issue as no government official has responded to their demands. Some students even mentioned former ISPR DG Major Gen. Asif Ghafoor.

The Pakistan Army will never ignore the difficulties of the students, a tweet said. Another reads, "It's a humble request to General Qamar Javed Bajwa to help students as we are in a huge phase of depression and anxiety, please help us."

Much akin to the earlier episodes, many of the students cited uncertainty for the academic year. Others said educational institutions remained closed amid the Covid second and third wave, due to which online classes were conducted only for a short period.

"If physical classes were not held then why are physical exams being taken?" a student questioned. Others said, "How could authorities announce exams without consulting students?"

Here are some of the reactions from the protesting students:

Let's see who will win this battle .
Against cheep minister @Shafqat_Mahmood....@OfficialDGISPR#PakArmyHelpStudents pic.twitter.com/uudf1Hin7b

Inshaallah have the strongest believe that army will not disappoint us like our prime minister you’ll listen to our demand and will give us our right #PakArmyHelpStudents pic.twitter.com/pavm09tBvA

During the flood and earthquake, army helped alot .It played a vital rule in imposing SOPs during 3rd wave of Covid 19. Now we, the STUDENTS of this nation are asking for the help of ARMY. @OfficialDGISPR Help us we are depressed. 😞#PakArmyHelpStudents #PakArmyHelpStudents pic.twitter.com/LN7jVNdFPS

We have to show to govt of pakistan about power of students...#PakArmyHelpStudents pic.twitter.com/Bs6waCrZJt

STUDENTS!
As Government is ignoring us, THIS IS OUR LAST CHANCE!
IT IS NOW OR NEVER!!!

We have to show government the POWER OF STUDENTS!!
Tweet as much as you can with #PakArmyHelpStudents
We have only 1 DAY, WE GOTTA TAKE THIS TREND TO 1 MILLION !!!
START TWEETING!!! pic.twitter.com/nDKw5lV1zR

It seems students don't want to make any appeal to Federal Education Minister Shafqat Mahmood who announced recently that nobody would be promoted without exams this year.

ISLAMABAD – Federal Minister for Education Shafqat Mehmood Saturday announced that nobody will be promoted ...

On Saturday, Mahmood reiterated that examinations would neither be postponed nor cancelled this year. He advised the protesting students to focus on their studies.

ISLAMABAD – A wave of student protests against board exams has been sweeping across Pakistan after NCOC decided ...