Countrywide students protest against board exams in Pakistan 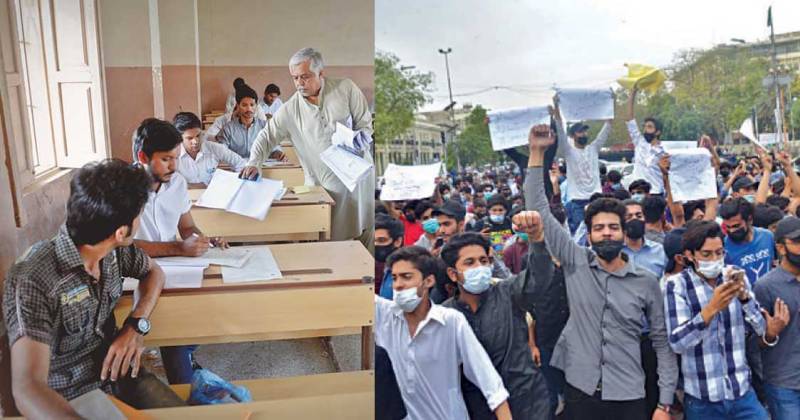 ISLAMABAD – A wave of student protests against board exams has been sweeping across Pakistan after NCOC decided that board exams will be held this year amid the Covid pandemic.

Following the announcement of the country’s nerve center on novel disease, students staged protests as they don't want to sit for their exams this year citing reservations on online classes and continuous gaps in the academic year.

On Monday, demonstrations were held in Swat, Rajanpur, Bahawalnagar among other cities of the South Asian country.

In parts of KP, students gathered in different groups and chanted slogans against the incumbent government. Students also rallied on multiple highways and disrupted the traffic flow.

The agitating students blocked the Peshawar-Karachi highway in Rajanpur, and demanded the government to revoke its decision. The police also baton-charged groups of students and fired tear gas shells to disrupt them, several cops and protesters suffered injuries in the clash.

On Sunday, board students protesting against physical examinations clashed with the federal law enforcers near the Faizabad area.

Police apprehended scores of agitating students while dozens of motorcycles impounded during the clash as students staged a protest demanding online examinations.

Students also blocked the Islamabad Expressway due to which traffic halted for hours. They also damaged vehicles and set trees on fire following which the cops launched a baton charge and fired tear-gas shells to disperse the protesters. They even retaliated and pelted the police with stones.

Earlier, the uncertainty shrouding the board exams was removed by top officials when it announced the examinations for matric and intermediate. The decision has been taken keeping in view the improvement in the third wave of the Covid pandemic. Federal Minister Shafqat Mahmood also announced that board exams will not be canceled despite a long call from students who have been citing health concerns due to the prevailing situation of COVID-19.

During the first wave of novel disease, the matric and intermediate students were promoted without any examination.