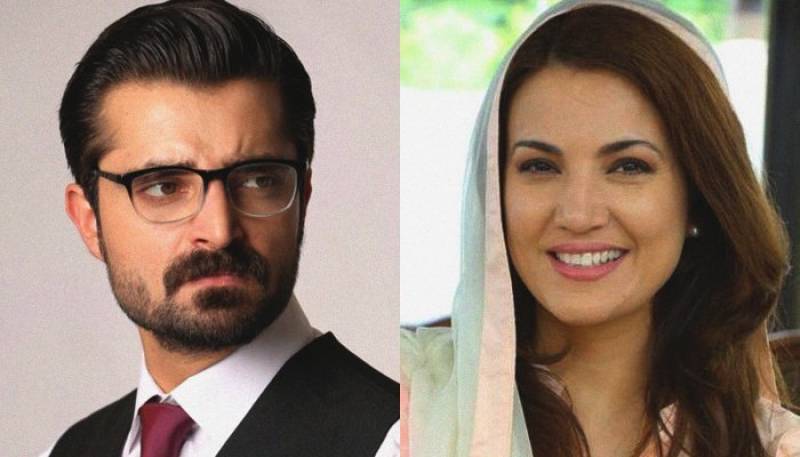 LAHORE - In a recent spat which involved Pakistan Tehreek-e-Insaf (PTI) Chairman Imran Khan’s acquaintance and London based businessman, Zulfi Bukhari, alleging to take legal action against Reham Khan after manuscripts of her soon-to-be-published book were leaked, a legal notice has just been sent to PTI member and supporter, Hamza Ali Abbasi.

Legal Notice sent to @iamhamzaabbasi on behalf of @RehamKhan1 Media can use it if they wish. #defamation #harassment #misogyny #metoo #timesup pic.twitter.com/Xco8iEfNln

According to details, the book revolves around Reham’s marriage with Imran Khan and her time with the PTI chief amongst various aspects of her life, vowing to throw the opposition party in a bad light.

The book caused an outrage amongst PTI supporters and leaders, who have been vehemently critical of the news presenter.

Earlier on Saturday, Reham accused actor and PTI member Hamza Ali Abbasi of threatening her of consequences via e-mail if she does not put an end to her “anti-Imran and PTI” stance.

Hamza Ali Abbasi, also, on a private TV show revealed that he did not possess any documentary proof or evidence when he made allegations that Reham Khan took ‘100,000 British Pounds’ from Punjab Chief Minister Shehbaz Sharif to write her upcoming book.

Upon being questioned on these allegations by the show’s anchor, Abbasi claimed that he had no proof or evidence that this transaction had occurred.

He said, “If you’re asking for documentary proof or of receipt of this transaction, then I do not have it.”

In the legal notice sent to Abbasi, the self-proclaimed actor and activist claimed that Reham admitted to being in touch with “claiming to Ahsan Iqbal”. He quipped his line of argument with a hysterical “lol”

In her legal notice to me, Reham just admitted to being in touch with a man claiming to be Ahsan Iqbal.... Oh God... Lol pic.twitter.com/7vcIPP1Pt5