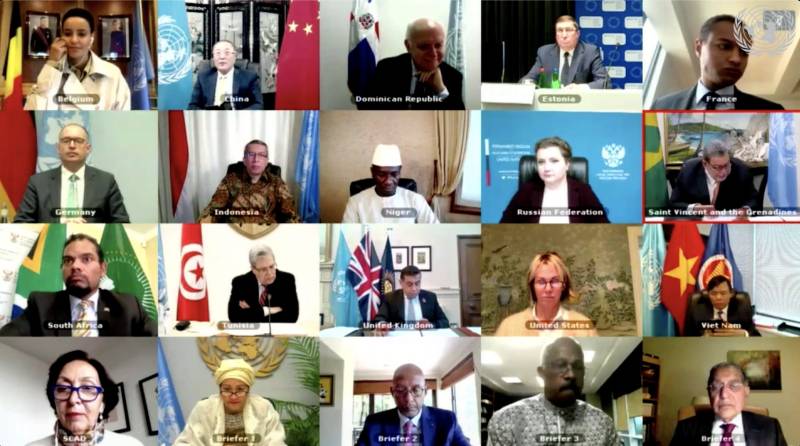 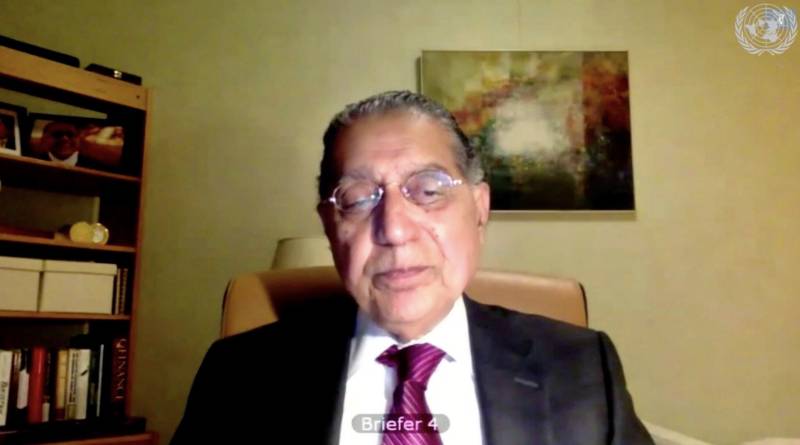 NEW YORK - The President of UN Economic and Social Council (ECOSOC), Ambassador Munir Akram of Pakistan, today told the Security Council that the present "unequal world order" was responsible for the member states' failure in living up to the ideals of collective and cooperative security, and called for international cooperation to address the multiple challenges facing the world.

He said this while speaking in his capacity as President ECOSOC at the Security Council High level virtual open debate” Contemporary Drivers of Conflict and Insecurity.

“The root causes of these conflicts range from the internal struggles for scarce resources; external contests for precious natural resources, and interventions designed to suppress the struggle of peoples to reclaim their own political and economic destinies”, Ambassador Munir Akram insisted.  “It is in this milieu of inequality that the world has been hit by the worst pandemic since 1916 and the worst recession since the Great Depression of the 1930s”: he added.

While expressing his deep concern over the impact of Covid-19, he mentioned the projected contraction of the world economy by 5-10 percent, depending on when the virus can be brought under control. “The poorest countries and the poorest peoples will suffer the most and over a 100 million will be pushed back into poverty” he feared. He emphasized the struggle of developing countries as a consequence, saying that “the poor are searching for ways to mobilize the $2-3 trillion they need to keep their economies afloat”. “Unless they are helped to find this money, are likely to face economic collapse. This would spread chaos and further inflame regional conflicts and global tensions” he added.

He reiterated that “the parallel objectives, set out in Article 55, to create conditions of peace and stability “ are necessary for peaceful and friendly relations among nations and are based on respect for the principle of equal rights and self-determination of peoples”. He insisted that: “Although little noted and never utilized, Article 65 of the Charter provides that the Economic and Social Council “may furnish information to the Security Council and shall assist the Security Council upon its request”. Ambassador also quoted US President Roosevelt’s speech at the Bretons Woods Conference that emphasized the essence of collective economic security: “Economic Diseases are highly communicable. It follows therefore that the economic health of every country is a proper matter of concern to all its neighbours, near and distant”.

Akram expressed his concern over collective failure to achieve the objectives, saying that: “In the seventy-five years since the Charter’s adoption, the UN’s Member States have failed to live up to the ideals of collective and cooperative security proclaimed by those who conceived the United Nations”. He cited reasons that can be offered to explain this failure. First, the Cold War intruded into the vision of universal and cooperative security which effectively divided the world into rival camps.  Second, the rapid process of decolonization did not entirely eliminate the legacy and mentality of colonialism. Thereby, the post-1945 military, political and economic structures and institutions reflected this embedded inequality. Third, and perhaps most important, state power, especially in the most powerful countries, was captured by mercantilist interests, prioritizing profits over the common good and the Charter’s vision of collective economic security.

He informed on Pakistan’s key decisions in line with global initiatives in combating COVID-driven economic challenges:  “As early as April, Pakistan’s Prime Minister, Imran Khan, called for global debt relief for the developing countries. In May, the Secretary-General, together with the Prime Ministers of Canada and Jamaica, launched the timely financing for the development process” He, however, was concerned on the response saying: “The process has identified 260 “options” for action. But so far, the response of those in a position to act on these options has been extremely modest and disappointing”. He encouraged the international community to mobilize the political will to implement some of the most important options, such as Debt Suspension for low income and those SIDS under stress until the end of the pandemic; Cancellation of LDC debt; Debt restructuring for other developing countries, including through efficient debt buybacks and swaps; Sizable Net inflows from Multilateral Development Banks; Vastly expanded concessional financing through IDA and other sources; Fulfillment of the 0.7 pc ODA commitment by richer countries; Private sector participation in debt suspension and relief, including through mechanisms to lower interest rates on loans to developing countries; and most importantly, the issue of new SDRs and the repurposing of unutilized SDR quotas for SDG investment.

Joining and advocating the UN’s ambition in this scenario, Ambassador Munir Akram said that: Our Secretary-General has declared that this crisis offers an opportunity to “Build Back Better” and realize the SDGs and the goals of the Paris Climate Agreements. Others have picked up the Secretary General’s slogan”. But he insisted that “we will be unable to achieve these ambitious and vital objectives unless we address and redress the structural inequalities which have led us into the current and previous financial and economic crises”.

“Unless we can mobilize the political will to implement these goals of equitable and inclusive development, it is unlikely that we will be able to agree to take the ambitious collective actions required to avoid the existential threat posed by climate change, and destitute developing countries struggling for economic survival will be in no position to make a “new Green Deal”: he insisted.

He affirmed that “The ECOSOC will attempt to advance these essential actions in its Financing for Development (FFD) Forum next April and the High-Level Political Forum (HLPF) next July. It is imperative that today, 75 years after the adoption of the UN Charter, we do not fail again to reflect its vision of collective economic security”.

Ambassador Munir Akram drew attention to other key hindrances in achieving the objectives: “It is distressing to witness that, even in these times when humanity faces existential challenges, there is a rise in the phenomena of intolerance, hate speech, xenophobia, and Islamophobia. The cycle of hate and violence can destabilize and divide societies and States. It can subvert the international cooperation that is essential to collectively address these multiple challenges”. In this regard “We must heed the call for Mutual Respect issued by the High Representative for the United Nations Alliance of Civilizations, HE Moritanos, on 29 October,” he added further.

“Finally, we must also act to reverse the growing rivalries among the most powerful States and the new and deadly arms race which is underway. Unless we do so, regional tensions will rise and conflicts become more intractable” he insisted.

“And, no one can rule out the danger of a global military conflict- precisely what the United Nations was created to prevent. Instead of subscribing to new political blocs and alliances, the Members of the United Nations, and especially the members of the Security Council, must deploy all possible efforts to avoid a great power “collision” and evolve mutually acceptable ways for revived cooperation on security, development, climate and other common challenges confronting humanity” he said.

“In these turbulent times, the United Nations is the only universally acceptable instrument available to enable Member States to address the “contemporary drivers of conflict” he reaffirmed. As the UN system has the capacity, “if mobilized, to support this epic endeavour for global peace and security, for equitable and inclusive development, and for smooth and early transition to a sustainable global economic, social and political order” he concluded.

Ambassador Munir Akram also congratulated Saint Vincent and the Grenadines on assuming the Council’s Presidency and convening this important debate.

The meeting was chaired by Ralph Gonsalves, Prime Minister of Saint Vincent and the Grenadines, and also attended by the Secretary-General, António Guterres, while Ambassador Munir Akram was invited as a briefer in his capacity as President ECOSOC.