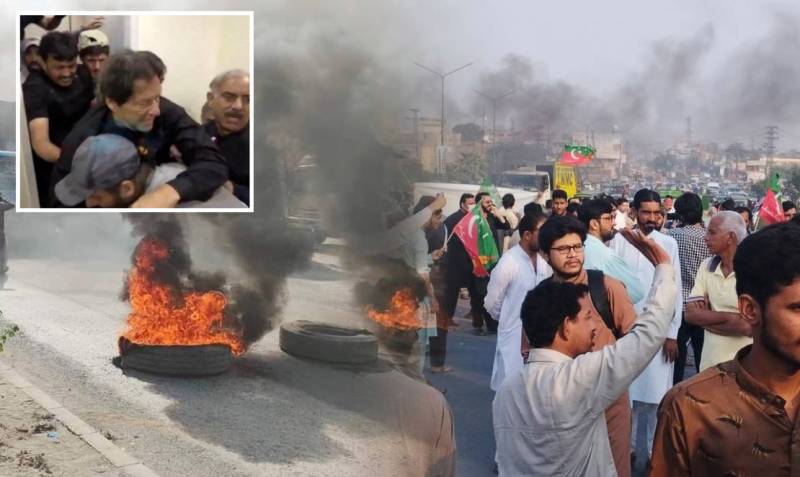 LAHORE – Former ruling Pakistan Tehreek-e-Insaf announced protests across Pakistan after Friday prayers today, saying the demonstrations will continue until the demand of Imran Khan is met.

PTI Secretary General Asad Umar announced the development, a day after the former premier sustained a bullet injury in his leg in an apparent assassination attempt.

As Khan is recovering after a surgical procedure, his party called for huge protests after Friday prayers to protest the assassination attempt, and protests will continue till the demands of PTI Chairman Imran Khan are met.

Meanwhile, Lawyers in Punjab observed strike on the appeal of Punjab Bar Council. The legal bodies boycotted court proceedings and hearing of cases were adjourned without proceeding.

Charged workers of the Imran Khan-led party also took to the streets in parts of the country where they blocked roads, burn tires, and chanted anti-government slogans.

In a video statement, Umar said that Khan, who is currently under treatment for bullet wounds in the Shaukat Khanum Hospital Lahore, has recently held a conversation with Mian Aslam Iqbal and him.

“Imran Khan told us that he had prior information of attack on him,” Umar said, adding that the PTI chief had held Prime Minister Shehbaz Sharif, Interior Minister Rana Sanaullah and Major General Faisal, whose name was surfaced during Azam Swati’s alleged custodial torture incident, responsible for the attack.

“Our immediate demand is that all the three should be removed from their positions,” the PTI leader said.

On Thursday, a huge number of PTI supporters marched alongside the container on foot and some on vehicles toward today’s destination, when a gunman, who appears to be aged between 30 to 40 years, attempted to target the PTI leaders, who were standing on the container’s roof.

The PTI chief and other leaders, including Senator Faisal Javed, Umar Dar, and Ahmed Chattah, are among the eight people injured in the incident while a citizen, identified as 42-year-old Moazzam, died on the spot.

Videos shared on social media shows the attacker waving gun in the air and firing bullets when one of the PTI supporters jumps on him to snatch the pistol.

Onlookers said that the attacker was carrying a automatic pistol and he missed the target after he was captured the long march participants.

WAZIRABAD – The ousted prime minister and chairman of PTI is recovering in hospital after an assassination ...