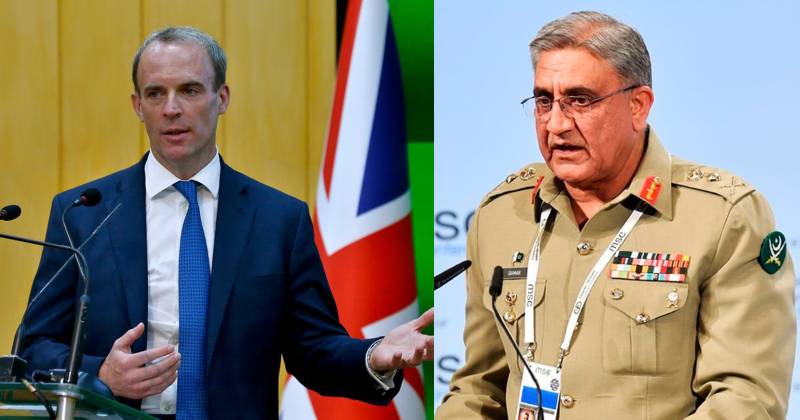 According to the Inter-Services Public Relations (ISPR), both sides discuss matters of mutual interest, including defense and security cooperation along with the current situation in Afghanistan.

COAS Gen Bajwa reiterated to work for peace and stability in Afghanistan, and he also assured to support the establishment of an inclusive government in the neighboring country.

Dominic Raab, during the meeting, said that diplomatic cooperation with Pakistan will be expanded at all levels. Pakistan played a key role in the current situation in Afghanistan, he said while commending Pakistan’s efforts in evacuations from Afghanistan.

ISLAMABAD – Prime Minister Imran Khan has urged the international community to stand in solidarity with the ...

Earlier, UK Foreign Secretary called on Prime Minister Imran Khan in the country’s federal capital. Khan while discussing the current situation with British dignitary urged to stand in solidarity with the Afghan people.

Khan also cautioned against the role of "spoilers", both inside and outside Afghanistan, which could destabilize the situation. He underlined the importance of a peaceful, secure, and stable Afghanistan for Pakistan and regional stability.