‘Hungry Parvez Uncle eating the things I got for Serena,’ story behind Maryam’s caption on Twitter 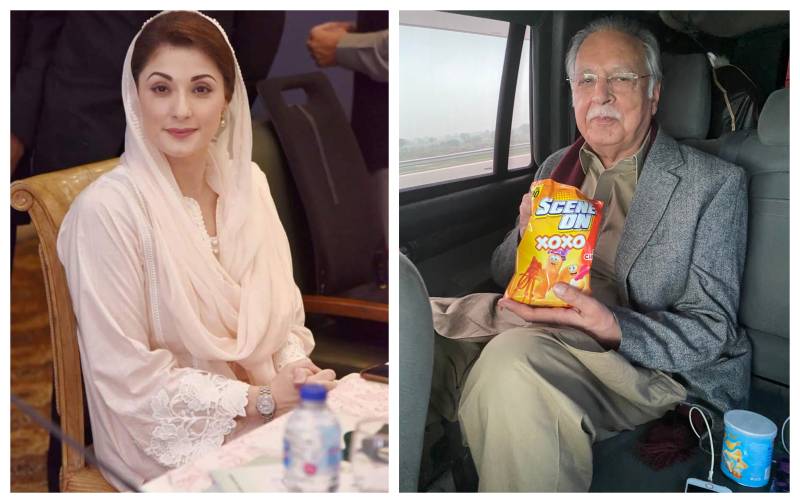 The picture was taken at a rest area on motorway when she stopped there while going to Lahore from Bahawalpur after attending a rally held by Pakistan Democratic Movement (PDM) against the government.

She actually stopped at the rest area to buy something for her granddaughter, Serena. She also took her on a live video call, showing her the toys in a shop and asking her what she wants to get.

The pleasures and joy of being a Nano 😍 Alhamdolillah for that 🙏🏼 https://t.co/VkKdVRL2ot

Maryam Nawaz calls it, “The pleasures and joy of being a Nano [grandmother] Alhamdolillah for that”.

After some time, she shared the picture of Rashid in which he can be seen eating chips. Maryam in the caption on her Tweet, wrote: “Hungry Parvez Uncle eating the things I got for Serena”.

The packet of the chips carries words “SCENE ON” which is apparently a message to the ruling PTI government that the Opposition is not going to withdraw from its stance as it is being predicted by the ministers.

Hungry Parvez Uncle eating the things I got for Serena 😂 pic.twitter.com/N8xGeMYbTc

More than ten Opposition parties have gathered at the platform of the PDM to oust the government over election rigging and poor governance.

Nawaz Sharif, Maryam all set to return to Pakistan this month as PML-N 'ready for Punjab elections’