Don’t wait for an "insensitive and heartless" man, says the opposition leader while referring to PM Imran Khan 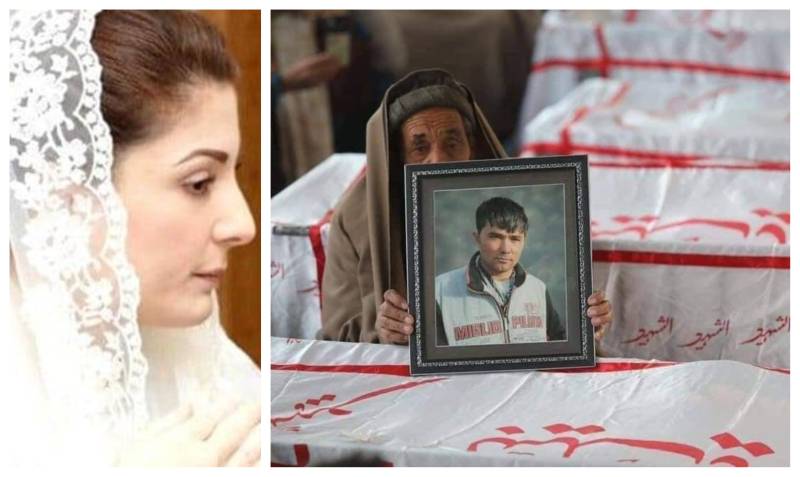 LAHORE – Opposition leader Maryam Nawaz has asked the members of Hazara community members, who are protesting at the Western Bypass in Balochistan over brutal killings of their relatives, to bury their dead.

Don’t wait for an "insensitive and heartless" man, Maryam said in a reference to Prime Minister Imran Khan who has not visited the mourners yet.

"May Allah (SWT) elevate their ranks in the hereafter and grant you patience," PML-N Vice President added in a tweet Wednesday.

The murder of the coal miners was not a small tragedy, she said, adding: "The whole nation shares your grief. My father and I are saddened too."

Ten coal miners were killed and four others seriously injured on Sunday after armed men attacked them at a coal field in Balochistan's Bolan district. The 10 miners were kidnapped before dawn on Sunday as they slept near the remote coal mine in the southwestern mountainous Machh area — 60 kilometres southeast of Quetta city.

The terrorist group Daesh has claimed the attack, according to SITE Intelligence, which monitors militant activities worldwide.

Since then, hundreds of Hazaras men, women and children have staged a sit-in at the Western Bypass in extremely cold weather, blocking the highway with bodies. They have refused to end the sit-in until PM Imran Khan personally meets the victim families.

A day earlier, Interior Minister Sheikh Rasheed Ahmed also visited the city and held meetings with Hazara community leaders and provincial government officials. He announced a compensation of Rs2.5 million for the families of the slain coal miners.