US offers $20 million in rewards on 'four IS leaders' 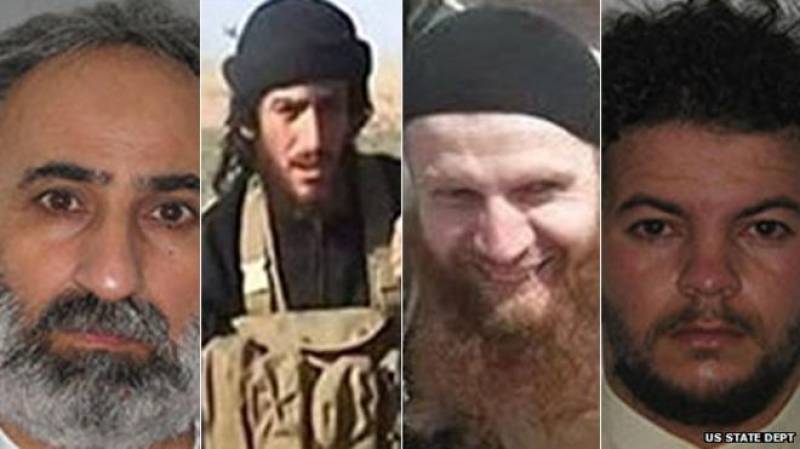 WASHINGTON (Web Desk) - The US government is offering rewards totaling $20m (£13m) for information on what it says are four leaders of the Islamic State (IS) militant group, the BBC reported on Wednesday.

They join a list of suspects sought under the Rewards for Justice Program.

On Tuesday, Islamic State said it was behind an attack in Texas.

It said "two soldiers of the caliphate" had attacked a holy Prophet (PBUH) cartoon contest being held at a conference centre in Garland near Dallas.

The US State Department offered up to $7m for information on Qaduli whom it described as a senior IS official who originally joined its precursor, al-Qaeda in Iraq (AQI).

It offered $5m each for Adnani and Batirashvili and up to $3m for Harzi.

It describes Adnani as an official IS spokesman, Batirashvili - who is also known as Omar Shishani - as a battlefield commander in northern Syria, and Harzi as chief of the group's suicide bombers.

IS has seized swathes of territory in eastern Syria and northern Iraq, declaring them a caliphate and imposing a harsh interpretation of Islamic law on the inhabitants.

The state department said the group was responsible for systematic human rights abuses, including mass executions, rape and the killing of children.

The highest reward offered under the Rewards for Justice scheme is up to $25m for Ayman al-Zawahiri who was named leader of al-Qaeda in June 2011, shortly after Osama Bin Laden's death.

It also offers up to $10m for IS leader Abu Bakr al-Baghdadi.

On Tuesday, a report on IS's al-Bayan Radio said the exhibition in Garland had been "portraying negative pictures of the Prophet (PBUH)".

The contest had offered a $10,000 (£6,600) prize for a cartoon of the Prophet (PBUH). Depictions of holy prophets are offensive to many Muslims.

Both gunmen were shot dead by a police officer after they opened fire outside the venue on Sunday.

US officials later said they doubted the group's direct involvement.