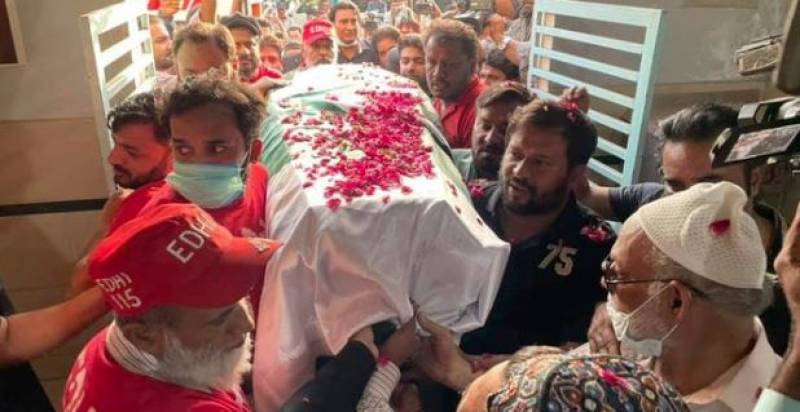 KARACHI – Legendary comedian Umer Sharif was laid to rest at the Abdullah Shah Ghazi graveyard in Karachi on Wednesday.

The funeral prayers were offered at Umer Sharif Park in Clifton which was attended by a large number of people including politicians and artists.

Strict security arrangements were made on the occasion, law enforcement personnel were deployed to avoid any security situation. People from all walks of life came to pay their last respects to the legendary comedian. Actors Rambo, Saud, and PSP chairman Mustafa Kamal were in attendance as well.

Around 200 personnel led by two DSPs were deployed for the security of the funeral, while walk-through gates were installed at the main gate of the park. Bomb Disposal Squad also cleared the area before the funeral.

The body, which was draped in the Pakistani flag, was moved in a convoy for the funeral. A large number of people also visited Sharif’s residence to offer their condolences.

Earlier, the body of legendary comedian Umer Sharif has been transported to the Sindh capital from Germany via a Turkish flag carrier.

Reports in local media cited that Sharif, who passed away in the European country last week after his health condition deteriorated while en route to the United States, will be laid to rest at a graveyard on the premises of the Abdullah Shah Ghazi’s shrine.

Sharif’s body was earlier shifted to Istanbul, from where Turkish Air carrying the body landed at Karachi International airport in the wee hours of Wednesday (today).

Meanwhile, Pakistan’s consul general in Germany Amjad Ali, and Sharif’s widow Zareen Ghazal accompanied the body. The body was later wrapped in the Pakistani flag was handed over to the family of the Mr. Charlie actor and it is reportedly at the mortuary of the social welfare department.

Pakistan’s envoy to Germany Dr. Mohammad Faisal also shared the development in a Twitter post. “Mortal remains of Mr. Umer Sharif are being flown to Karachi, Pakistan, shortly, via Turkish Airlines. His wife would accompany on the same flight,” the tweet reads.

Mortal remains of Mr. Umer Sharif are being flown to Karachi, Pakistan, shortly, via Turkish Airlines. His wife would accompany on the same flight.

The celebrated comedian breathed his last in Germany after being hospitalized with pneumonia in Nuremberg where he landed for a brief stopover to be later taken to Washington via an air ambulance for life-saving treatment.

BERLIN – Pakistani comedian Umer Sharif’s wife Zarin Ghazal, who traveled to the US with her ailing ...