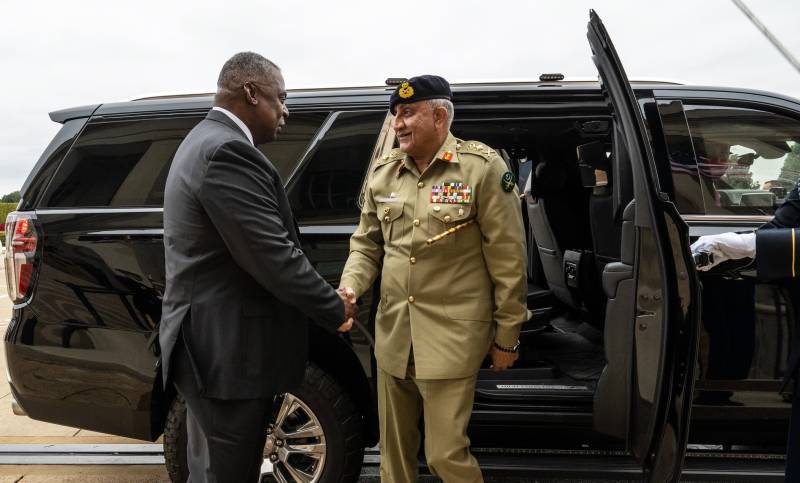 WASHINGTON – Chief of the Army Staff General Qamar Javed Bajwa, who visited Washington weeks before his scheduled retirement, called on US Secretary of Defense Lloyd Austin at the Pentagon, where two sides discussed ‘long-standing defense partnership’ during their meeting.

In a statement, the US defense secretary said ‘This year marks the 75th anniversary of relations between the US and Pakistan. It was my pleasure to host Pakistan’s Chief of Army Staff General Qamar Javed Bajwa to the Pentagon.”

He further added that he discussed long-standing defense partnership and areas of mutual interest with Pakistan’s top general.

This year marks the 75th anniversary of relations between the U.S. and 🇵🇰 Pakistan. It was my pleasure to host Pakistan’s Chief of Army Staff, General Qamar Javed Bajwa, to the Pentagon where we discussed our long-standing defense partnership and areas of mutual interest. pic.twitter.com/ptiZDiqc8I

Local media reported that General Bajwa also exchanged views about international matters including India, China, and Afghanistan in his meetings with top US administration officials. General Bajwa also mentioned that Islamabad seeks an early resolution of the long-standing Kashmir issue.

He also called for improvement in bilateral relations, trade, and investment between Pakistan and US.

Following Army Chief’s week long trip to Washington, he left for his homeland.

“Both sides had convergence on major international issues, including Afghanistan,” and also on the “need for cooperation to avoid humanitarian crisis and improving peace and stability in the region”.

Diplomatic sources in Washington, however, say that the talks with US officials focused on renewing the strong defence partnership that once existed between the two allies.