Pakistan will not become party to the regional conflict: FM Qureshi 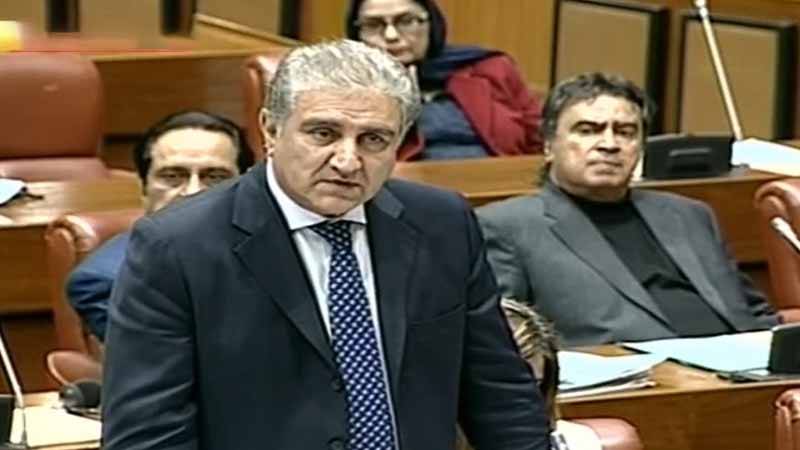 ISLAMABAD - Foreign Minister Shah Mehmood Qureshi said that Pakistan will not become a party to the regional conflict.

While briefing the Senate on tensions between the US and Iran escalated after the killing of top Iranian commander Qasem Soleimani in a US airstrike, the foreign minister began his speech by recounting how the crisis-like situation in the region unfolded, starting with the killing of an American contractor in a rocket attack in Iraq that led the US to carry out strikes on an Iranian-backed Iraqi militia.

He told the Senate that according to regional experts, the repercussions of the strike that killed Soleimani could be more severe than the 2011 raid that killed Al Qaeda leader Osama bin Laden and the 2019 killing of militant Islamic State group chief Abu Bakr al-Baghdadi.

Giving a policy statement over the evolving situation in the Middle East in the Upper House on Monday evening, he said Pakistan can play a role in reconciliation, peace and stability, but will not augment fire of war in the region.

The Foreign Minister said he has talked to his regional counterparts, including Iran and emphasized on exercising utmost restraint to avoid any conflict in the region as a new war may have a disastrous impact on regional countries.

Shah Mahmood Qureshi said Pakistan does not support any unilateral action as the use of force cannot offer any solution to an issue.

Expressing apprehensions on the implications on the recent incident of the killing of Iranian commander in US attack in Iraq, Shah Mahmood Qureshi said this may lead the region to further instability, especially chances of destabilization of Iraq and Syria have increased.

He said Iraq had decided to send its foreign minister to the United Nations to record protest because in their view the strike violated international law and UN charter.

Iran's foreign minister, meanwhile, considers this act as dramatically escalating the regional situation. The Pentagon, on the other hand, acknowledged that the strike was carried out on the direction of US President Donald Trump, Qureshi said.

He urged the international community, the United Nations, and other world bodies to play their due role in averting any conflict in the region.