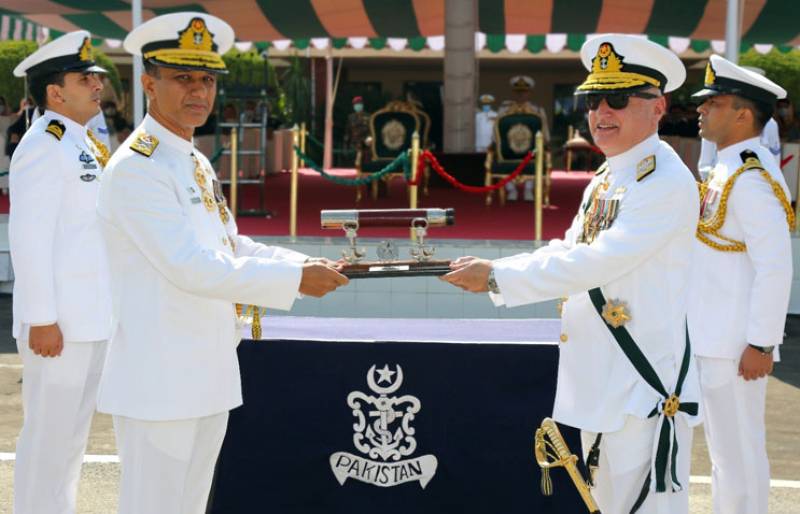 ISLAMABAD - Admiral Amjad Khan Niazi, recipient of Hilal-i-Imtiaz (Military) and Sitara-i-Basalat, has taken charge as the new Chief of the Pakistan Navy in a ceremony held in Federal capital today (Wednesday).

At the change of command ceremony, Outgoing Naval Chief Admiral Zafar Mahmood Abbasi handed over the command scroll to the New Naval Chief.

Zafar Mahmood Abbasi said during his tenure as the Naval Chief, his special emphasis remained on combat readiness and professional competence.

Giving a complete overview of the development strategies of Pakistan Navy, the outgoing Naval Chief said these are aligned with the evolving threats and challenges.

Zafar Mahmood Abbasi said a fleet size of fifty plus ships including twenty major ships was envisioned to improve the capabilities of the naval force. He said four Chinese Frigates will be inducted in the next few years. Four Turkish medium class ships will be inducted between 2023 and 2025, the Radio Pakistan reported.

The outgoing Naval Chief said Hangor submarine project in collaboration with China is progressing well with four submarines being built in China and four in Pakistan. He said these submarines will be delivered to Pakistan in the next few years. He said this project will transform us from a submarine operating Navy to a submarine building Navy.

Zafar Mahmood said a major naval base for surface ships is being developed at Gwadar to enhance Pakistan Navy's operational flexibility along our coast.

New Naval Chief Admiral Amjad Khan Niazi was commissioned in Operations Branch of Pakistan Navy in 1985. He has served on various command and staff posts.