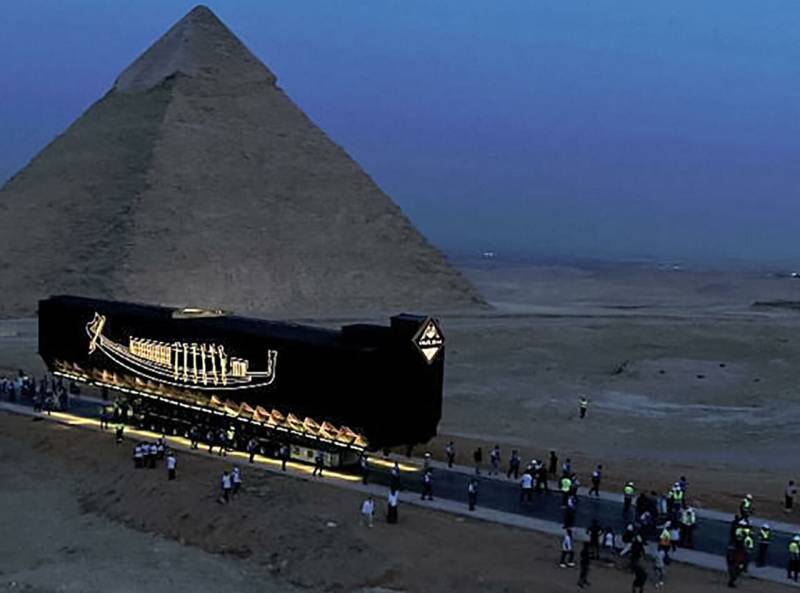 Reports quoting Egypt’s Ministry of Tourism and Antiquities cited that the Great Boat, which is around 42-meter-long and 20-ton in weight, was moved to its new permanent display home with the help of heavy machinery. It had been on display near the Great Pyramid.

A statement issued by the ministry said “The aim of the transportation project is to protect and preserve the biggest and oldest organic artifact made of wood in the history of humanity for the future generations.”

The giant vessel was commissioned by Khufu, a Fourth Dynasty monarch who ruled during the old Kingdom.

The Egyptian pharaoh Khufu’ boat was discovered in 1954 at the southern corner of the Great Pyramid and has been exhibited for decades at a museum.

CAIRO (Web Desk) - Giant men up to nine feet tall who could herald the return of ancient Mesopotamia gods have ...

The country has touted the anticipated opening of the GEM at the Giza plateau as an important archaeological landmark housing its most precious antiquities. The officials boasted that the giant boat is the ‘biggest and oldest organic artifact made of wood, in the history of humanity.'

Historians believe that such boats were buried in pits next to royal burial chambers in the belief that they would transport the departed leaders into the afterlife.