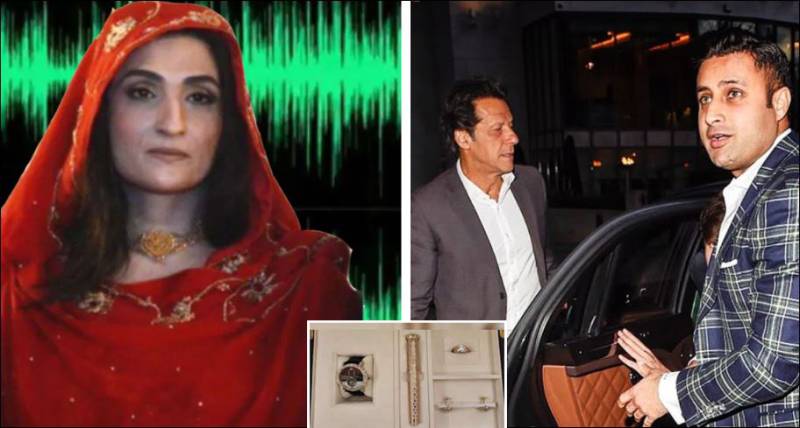 In the clip, the voice believed to be of Bushra Bibi, is heard saying: "There are some watches of Imran Khan, which the PTI chief received as gifts from foreign leaders."

Bushra allegedly told Zulfi Bukhari that "Khan Sahab asked her to hand over the watches to Zulfi," saying "those watches were not in Imran Khan's use anymore."

Another voice believed to be of Zulfi Bukhari, who is the former aide to the ousted PM for Overseas Pakistanis, replied in the affirmative, saying ‘job will be done Murshid’.

The watches referred in the above-mentioned audio leak are believed to be the ones that the PTI chief received as gifts during his premiership.

Today's leak is the latest in the Toshakhana gifts scandal which was allegedly sold by former premier Imran Khan at throwaway prices.

Last month, a UAE-based businessman Umar Farooq Zahoor came up with claims about buying an ultra-expensive watch and other accessories. He claimed paying $2 million to Farah Gogi, a close friend of Imran Khan’s wife Bushra Bibi, in cash when he purchased the watch from her.

On the other hand, the luxury watch sellers Style Out Watches shared a clip in which they claimed that the wristwatch was sold by them in 2019 for $250 000.

Amid all the hype, PTI chief Imran Khan decided to move the court against UAE businessman, private TV channel anchor, and the media house for running a ‘smear campaign’ against him.

ECP ruled that the populist leader intentionally and deliberately violated the provisions by submitting a false statement and incorrect declaration in the details of his assets and liabilities filed by him for the year 2020-21.