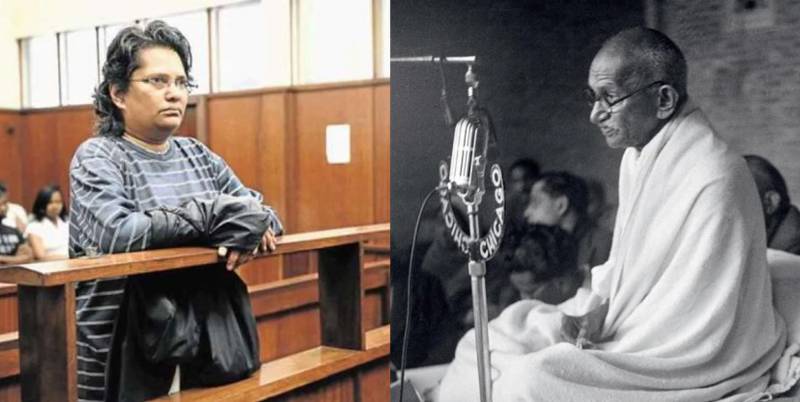 A report of an Indian news agency suggests that Ashish Lata Ramgobin, 56, was found guilty for fraud and forgery case by the Durban court on Monday.

The report further stated that Ashish, the daughter of Ela Gandhi and late Mewa Ramgobind, was found guilty of defrauding business personality SR Maharaj after the moneyed man gave her 6.2 million Rand for clearing import and customs duties for a non-existent consignment from India. SR Maharaj, who owns the New Africa Alliance Footwear, was promised a share of profits after customs clearance.

At the start of the trial against Mahatama’s great-grandaughter in 2015, Brigadier Hangwani Mulaudzi of the National Prosecuting Authority had said that 56-year-old allegedly provided forged invoices to convince potential investors that three containers of linen were being shipped in from India. Later, she was temporality released on a bail of 50,000 Rand.

On Monday, the court during the hearing was informed that she met Maharaj in August 2015. After which Maharaj’s company financed her in a bid to get profit. Later, Ramgobin sent a confirmation from NetCare’s bank account that payment had been made.

In our part of the world, it is unfortunately quite common to suffer from uncertainty and confusion regarding 'national ...

The report further added that the South African bases businessman made an agreement with her in wake of her family credentials. However, after he found that the documents were forged he laid criminal charges on Ramgobin which ended on the imprisonment of seven years.

The mother of convicted, Ela Gandhi, in particular, has been internationally recognised for her efforts, including national honours from both India and South Africa.

Ramgobin established the Participative Development Initiative at the International Centre for Non-Violence. Her work mainly focuses on environmental, societal other than political matters.