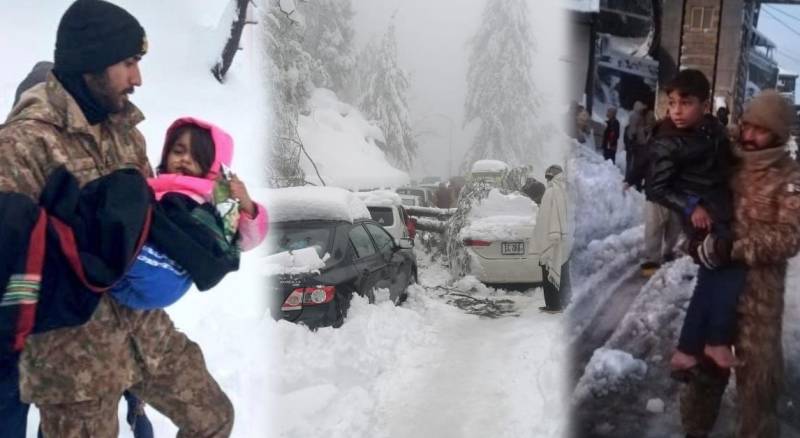 ISLAMABAD – All stranded tourists have been shifted to safer places in mountain resort town after 23 succumbed after getting trapped in a snowstorm, NDMA chairman said.

Speaking with a local news outlet, Lieutenant-General Akhtar Nawaz said around 371 tourists have been shifted to the relief camps set up by the Pakistan Army.

Armed forces personnel worked together with the civil administration in the evacuation operation while most of the routes have been reopened for traffic that was blocked due to heavy snowfall.

NDMA chief also added that the Control Room, under the supervision of Commissioner Rawalpindi, has also been established at Murree to provide assistance to tourists. The emerging situation is very challenging and the NDMA is taking all possible steps to normalize the situation, he added.

At least 10 minors were among the deceased on Saturday after a heavy snowstorm near a Pakistani resort town stranded thousand in their vehicles overnight on a highway in the country’s northeast.

Stranded citizens had been found dead, most from hypothermia, following thick snow fell fast in popular vacation destination in the mountains about 40 miles northeast of the federal capital.

A report on the Murree tragedy was also presented to Punjab Chief Minister Usman Buzdar by the Rawalpindi administration, as than 100,000 vehicles entered Murree over the past three days.

The report said the Pakistan Meteorological Department (PMD) had not alerted the district administration about the unprecedented snowfall that the hilly area was to receive.

LAHORE – Ninety percent of roads of Pakistan’s resort town of Murree have been cleared after at least 22 ...

Murree received five feet of snowfall, it said, adding the roads leading to the hill station were closed on the night of Jan 6 with people advised to avoid traveling to the area yet tourists in the large number reached there.

Prime Minister Imran Khan, while expressing his shock and grief over the deaths of tourists in Murree, ordered an inquiry into the tragedy and called preparing regulations to avert such tragedies in the future.

ISLAMABAD – Pakistan is mourning the deaths of 22 people, who lost their lives in an enormous traffic jam caused ...