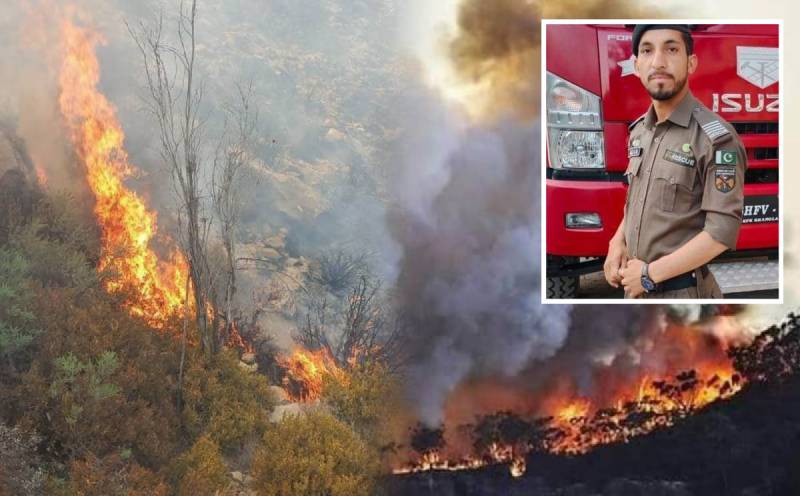 PESHAWAR – A firefighter of Rescue 1122 has embraced martyrdom while battling a forest fire that burned down a large number of trees in the country’s northwestern region Khyber Pakhtunkhwa.

The slain, who is identified as Nizam Ullah, was on the front line in performing his duty of extinguishing a fire that earlier left a woman, and her three children dead last week.

Officials said that Rescue staffers reached the site after long trekking of around three hours in the treacherous mountain terrain.

The remains of the martyred man descended from the area for taking back to home for performing his last rituals.

Director-General Rescue 1122 commended the brave heart firefighter, saying his sacrifice will be remembered in golden words.

Last week, a mother and her three children were killed after the massive inferno engulfed four forests in Chakesar Tehsil of Shangla District in Khyber-Pakhtunkhwa (KP).

PESHAWAR – A mother and her three children were killed in a forest fire in the country’s northwestern ...

Mountains in Khyber Pakhtunkhwa are becoming prey to the raging fire as thousands of trees on the mountains have already turned to ashes.

She mentioned that about 50 incidents of fire were reported in the Margalla Hills, green belts, and other surrounding areas of Islamabad in the last two months.

ISLAMABAD – Another fire broke out on Sunday and burnt a lush green part of Margalla Hills National Park. Thick ...