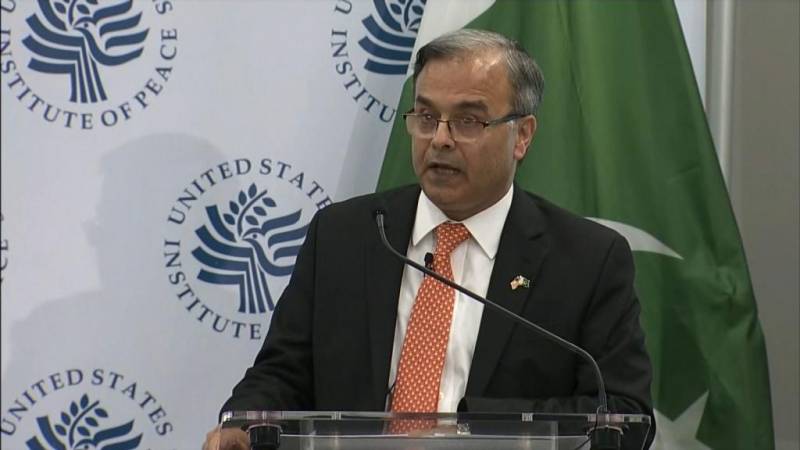 ISLAMABAD - Ambassador of Pakistan to US Asad Majeed Khan has said that the United States had an important role to play not only for bringing Pakistan and India to dialogue but also urge the latter to undo its decisions of changing the special status of Kashmir.

“US, as the preeminent power of the world, I think, has an important role to play in not just trying to help two countries to have a dialogue to resolve this (Kashmir) issue but also to urge India to undo things that they have done during the last one week in unleashing repression, arresting people across the board in turning the valley into a huge prison,” the ambassador said in an interview with Bloomberg on Friday.

He said the issue of the Indian Occupied Kashmir was very much on the agenda of the United Nations Security Council. Even in India’s own constitution, Kashmir had enjoyed a special status.

He said India had unilaterally changed the status of a territory that had been recognized by the international community including the United Nations as a disputed territory.

“And we, as a party to this dispute, have a very serious issue as how India had done it,” he remarked.

He said one consequence of this action was that the entire region was under a lockdown and India had added its troops presence also in Kashmir turning the whole valley into “perhaps the largest prison in the world with 12 million people being seen and watched by almost 900,000 troops.”

“This is a serious escalation, I think, right in our neighborhood which we are very concerned about,” the ambassador maintained.

To a question about what Pakistan could do in this regard, he said the world had seen Pakistan’s restraint and responsibility even during the Pulwama crisis when Indian had actually violated its sovereignty.

He said in face of that aggression, Pakistan’s response was very measured and was dictated by restraint.

Ambassador Asad Khan said that during his visit to the US, Prime Minister Imran Khan had consistently spoken about Pakistan’s desire for peace and the country remained committed to that.

“This escalation we are seeing on the other side, on Indian side, needs to be de-escalated for the two countries to engage in a dialogue,” he remarked.

To a question about the US response, he said the Spokesperson of the State Department had very clearly said that there was no change or shift in the US position which was to see Kashmir as a dispute and as a disputed territory. During Prime Minister’s visit to Washington, President Trump’s offer of mediation was itself a recognition of the existence of a dispute that needed a resolution, he added.

He said Pakistan had welcomed the President Trump’s offer of mediation but it was not accepted by India.

Responding to another query, the ambassador said Pakistan was fully occupied on its western front. Pakistan was doing whatever it could do to facilitate the peace process in Afghanistan. The country was also trying to manage a border which was very treacherous and porous to make sure that no insurgent come into its territory.

He said obviously, Pakistan also needed to guard its sovereignty and prepare against any aggression that could come from India as had happened in context of Pulwama incident.

“We are prepared to meet any eventuality but we are not going to be the one who would resort to any action that would endanger peace and security in the region,” the envoy remarked.