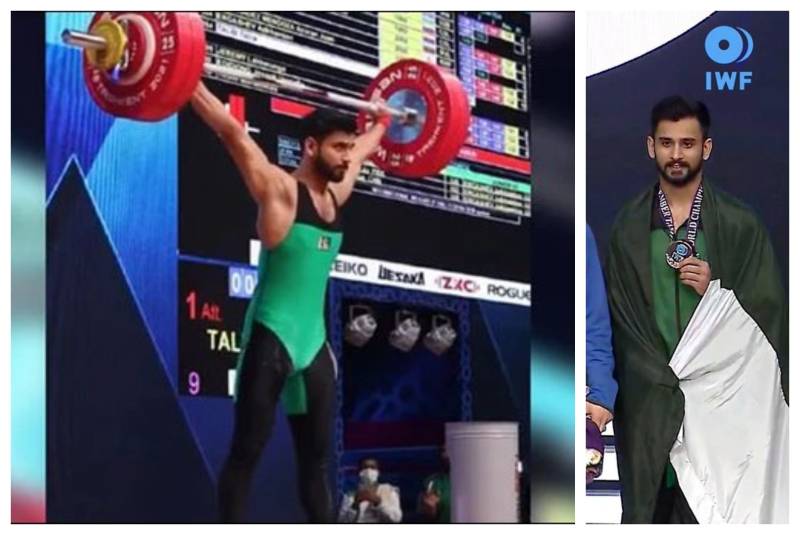 It is the first ever medal that the 21-year-old athlete has won for Pakistan in WWC.

He won bronze in 67kg category of males by lifting 143kg weight in the snatch category.

Talha Talib the Pakistani Rising Star has yet again made Pakistan proud where it mattered the most.
The Falcon won bronze medal in World Weightlifting Championship held in Tashkent Uzbekistan 🇺🇿🏋️‍♂️
Good job Boy. pic.twitter.com/yC3034NvuK

Earlier this year, Talha Talib represented Pakistan at the 2020 Tokyo Olympics where he had fell just two kilograms short of history as he lifted a total of 320 kilograms.

Talha, competing in the 67kg men's weightlifting contest, was on top of the race for a while before being surpassed by athletes from China, Colombia, and Italy in final attempts.

The 21-year-old weightlifter — first from Pakistan in 44 years at Olympics — entered the competition without a coach, yet he showed his mettle.

Congratulations continue to pour in on the historic win of Talha Talib in Tashkent.

Congratulations to @_talha_talib who won Pakistan's first-ever medal at World Weightlifting Championship with a bronze in snatch (143kg) in 67kg. pic.twitter.com/8maLdMnroR