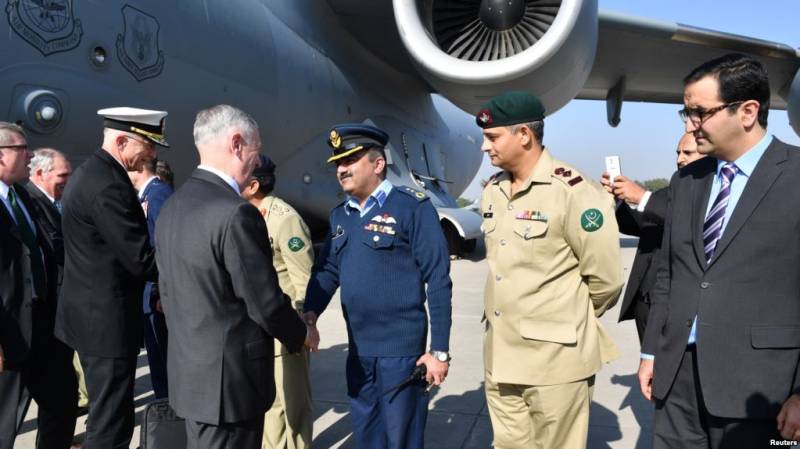 ISLAMABAD - After Pakistan Defence Minister Khurram Dastgir Khan announced to suspend military and intelligence cooperation with the US, the latter has denied such reports.

The defence minister on Tuesday speaking at a meeting entitled "Contours of Security Environment in Pakistan" said that the cooperation with the US had been ended, adding that there was need to discuss every matter with the US on table.

The minister, however, added that, the supply lines for NATO troops in Afghanistan will not be closed.

On the other hand, US Embassy in Islamabad has rejected the claims of any suspension. Talking to Voice of American Embassy spokesman Richard Snelsire said, “We have not received any formal communication regarding a suspension.”

Dastgir's comments follow the irresponsible behaviour of the US, who undermined the sacrifices rendered by Pakistan while supporting the US in Afghan war.

With the start of new year, US President Donald Trump took aim at Pakistan and accused it of being liar and deceitful. The fresh tirade by Trump prompt stern response from Pakistan.

After his remarks, the US suspended military aid to Pakistan till the action against the alleged safe havens of terrorists in Pakistan.

Khurram Dastgir Khan also added that the US was facing failure in Afghanistan war despite spending trillion dollars and redoubling the deployment of soldiers in the war-torn country.

He reiterated earlier claims that Pakistan was being made scapegoat in the war, adding, "We do not want price for cooperating with the US but seek acknowledgement for our sacrifices in the the war".

"We would not allow Afghan war be fought on Pakistani soil, " he said.

Commenting about US decision to withhold military aid, He said that such measure had no significance for Pakistan.

An English daily quoted the minister as "At the same time, strategic dialogue between the two countries has also faced suspension for last two years. High level dialogues with US would not work until resumption and consistency in working level dialogues".

Talking about ties with India, the defence minister said that Pakistan desired amicable relations with its eastern neighbour, who is implementing the Cold Start doctrine causing tension in the region.