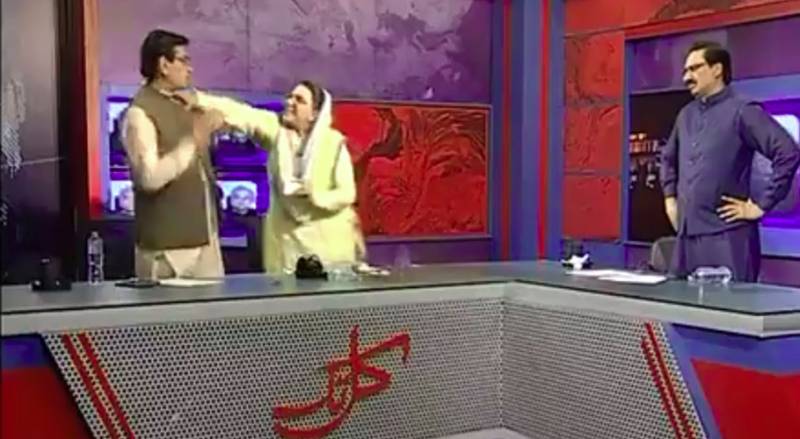 LAHORE – Special Assistant to Chief Minister Punjab on information Dr. Firdous Ashiq Awan engaged in a brawl with PPP lawmaker Qadir Mandokhel during the recording of the current affair program of a private news channel.

A short video clip of CM’s aide and Pakistan People’s Party MNA Qadir Khan Mandokhail has gone viral, in which the two politicians can be seen abusing each other besides physical brawl.

Reports in local media cited that PTI and PPP politicians were panelists on Kal Tak which was hosted by the country's celebrated journalist Javed Chaudhry. Both panelists, during the show, accused each other of corruption and exchanged some heated words.

The PPP leader alleged Awan for kickbacks against advertisements. After which, CM’s aide hinted to sue Mandokhail for defaming her. She also mentioned quitting the former PPP government because of corrupt practices within the party.

The heated debate spiraled into Awan verbally abusing and slapping Mandokhel in the face. The PPP leader can be seen telling the show host to stop her after being physically assaulted by the minister.

Following the event, Awan took to her official handle and claimed that Mandokhel had used inappropriate language which angered her, and that only a one-sided story was being shared in the video. Awan urged the mainstream media to release the full clip.

In the video posted on her official handle, she alleged that Mandokhel threatened her. PPP leader insulted my late father. I had to take an extreme step in my defence, she added.

Meanwhile, PPP MNA also released a video statement, saying Awan couldn't hold herself from hitting him when he exposed her 'corruption'.