Fight escalates as Kangana fires another round at Karan! 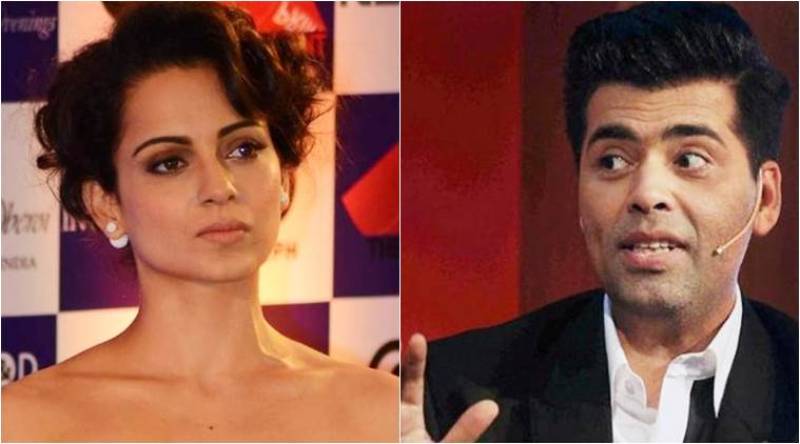 If you thought things were starting to come together between the much talked about Koffee with Karan duo Karan Johar and Kangana Ranaut, boy you have never been more wrong in your life!

The complicated love-hate dynamic between the onscreen pair has been carried out at length over social media platforms with both of them constantly firing statements back and forth at each other. The fight initially started with Kangana making claims on Karan Johar's popular talk show 'Koffee with Karan'  about him being a 'flag-bearer of nepotism' with no respect for outsiders inside the Bollywood film industry. In retaliation to this, Karan bashed out at Kangana at a meeting held in London saying that he has had enough of her playing the woman card and the victim card.

Just recently, the bold and striking Kangana hurled back at the talk show host with the most fitting replies:

"I use every card possible. At the workplace, it’s the badass card to fight cutthroat competition. With my family and loved ones, it’s the love card. When fighting the world, it’s the dignity card, and for a seat on a bus, it’s the woman card. What is important to understand is that we are not fighting people, we are fighting a mentality. I am not fighting Karan Johar, I am fighting male chauvinism."

Kangana further added, "I’m also a little surprised at the 'graciousness' he says he displayed in choosing to not edit the jousty bits on the show. While I’d have blacklisted the channel if something like that had happened, let’s also remember that a channel wants TRPs, and he is just a paid host. Also, the Indian film industry is not a small studio given to Karan by his father when he was in his early 20s. That is just a small molecule. The industry belongs to every Indian and is highly recommended for outsiders like me whose parents were too poor to give me a formal training. I learned on the job and got paid for it, using the money to educate myself in New York. He is nobody to tell me to leave it. I’m definitely not going anywhere, Mr Johar."