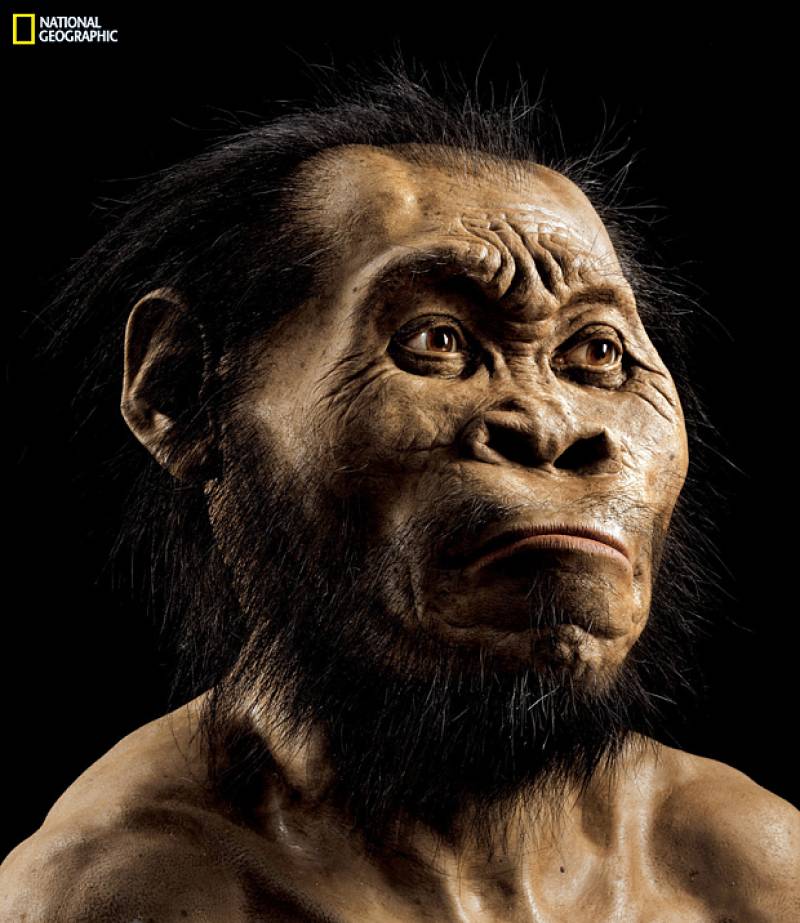 JOHANNESBURG (Web Desk) - New species of humans have been discovered in South Africa.

At least 15 skeletons of the species - named Homo Naledi - were found hidden deep in a cave dubbed the 'Star Chamber' in which is thought to be the earliest form of ritual burial ever discovered.

The early humans stood just five foot tall and weighed 100 pounds. Their hips were similar to our earliest ancestor, the hominid Lucy, but their shoulders were well designed for climbing but legs and feet were human like.

Their skulls are like early humans, but their brains are tiny, just the size of an orange.

"These individuals came in one at a time over a long period. They were not taken there by carnivores.

"We are also left with the idea that they did not live there. There is no archaeology.

That has led us to the rather remarkable conclusions that we have just met a new species of human relative that deliberatley disposed of its dead inside of the chamber in cradle of mankind.

"Until this discovery we thought that ritualised behaviours directed towards the dead, things like burial, was totally unique to home sapiens.

It perhaps in fact identified us. It may have been our singularly unique thing.

"We saw ourselves as different. We have now seen a species with the same capacity and that is an extraordinary thing."

The new species was found in a remote cave 50 kilometers northwest of Johannesburg, South Africa.

Scientists find fossils of our ancient relative, who had surprisingly human-like features, in a remote cave near Johannesburg

The 1,550 fossil elements excavated from the cave are believed to be parts of at least 15 infants, children, adults and elderly of the same species - and are just a small fraction of the fossils discovered.

Announced by the University of the Witwatersrand, the National Geographic Society and the South African Department of Science and Technology, the discovery sheds light on the origins and diversity of human ancestry.

The initial discovery was made in 2013 in a cave known as 'Rising Star' located in the Cradle of Humankind World Heritage Site.

The fossil material was recovered during two expeditions in November 2013 and March 2014, named the 'Rising Star Expeditions'.

The fossils lay in a chamber about 90 meters from the cave entrance, accessible only through a chute just 18-centimetres wide.

In the first expedition, over a period of 21 days, more than 60 cavers and scientists worked together to remove the fossils from the chamber.

The task required a special team of slender cavers dubbed 'underground astronauts' to remove the material.

Marina Elliott, one of the excavating scientists, described the process as "some of the most difficult and dangerous conditions ever encountered in the search for human origins".

Elliott was one of six women selected after a global search for experienced cavers who could fit through the tiny cave opening.

The fossils were analysed in May 2014 with over 50 scientists and researchers studying the treasure trove of fossils.

John Hawks of the University of Wisconsin-Madison, said: "Overall, Homo naledi looks like one of the most primitive members of our genus, but it also has some surprisingly human-like features, enough to warrant placing it in the genus Homo.

"H. naledi had a tiny brain, about the size of an average orange, perched atop a very slender body."

Dr Tracy Kivell of the University of Kent, in the UK, said: "The hands suggest tool-using capabilities.

"What's important for people to understand is that the remains were found practically alone in this remote chamber in the absence of any other major fossil animals."

Dr William Harcourt-Smith of Lehman College, City University of New York, and the American Museum of Natural History, who led the study of H. naledi's feet described them as "virtually indistinguishable from those of modern humans."

"The feet, combined with its long legs, suggest that the species was well-suited for long-distance walking," he said.

Professor Berger added: "The combination of anatomical features in H. naledi distinguishes it from any previously known species."

The researchers believe the most remarkable aspect of the find is that the primitive-looking discovery may have practiced a form of behaviour thought to be unique to humans - depositing bodies of its dead in a remote cave chamber.

Dr Paul Dirks of James Cook University in Queensland, Australia, said: "That room has always been isolated from other chambers and never been open directly to the surface.

"What's important for people to understand is that the remains were found practically alone in this remote chamber in the absence of any other major fossil animals."

Despite the dramatic revelation researchers claim a lot remains to be discovered from the cave.

Professor Berger said: "This chamber has not given up all of its secrets.

"There are potentially hundreds if not thousands of remains of H. naledi still down there."