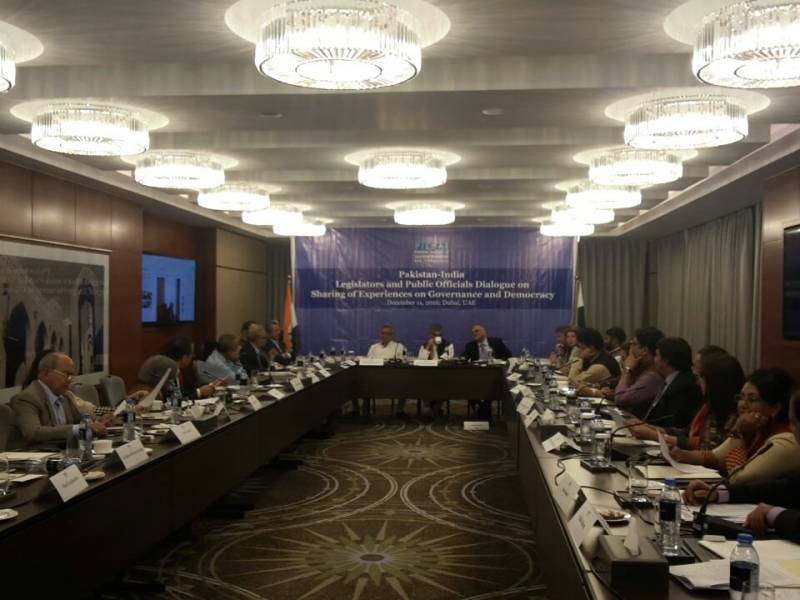 DUBAI - Indian and Pakistani parliamentarians and experts have called for a sustained dialogue process, adding that candid and consistent dialogue aimed at conflict resolution can only take place when the two states recognise and address their issues.

These issues include the ones mentioned in the Composite Dialogue 1997 and the Comprehensive Dialogue 2015.

They were speaking at the concluding session of the fifth round of dialogue between Pakistani and Indian Legislators and Public Officials, organised in UAE by civil society organisation PILDAT on Sunday.

In a joint statement issued after the meeting, they reiterated their earlier demand that India and Pakistan should implement policies ensuring ease of access, travel and reporting by journalists from both countries.

The dialogue was based on topics including “Role of Media in Improving Relations between Pakistan and India” and “How to Positively Take Forward the ‘Fight Poverty’ Agenda.”

In the session focused on "Role of Media in Improving Relations between Pakistan and India," the participants emphasised that, while media could play a positive role in influencing relations between the two countries, the essential responsibility to chart a course in this regard remains that of the elected leadership in both India and Pakistan.

Media in both countries must develop priority policies to positively influence ?? ?? relations @SassuiPalijo

Norms of humanity, decency must remain important for media in India and Pakistan in reporting on relations @MahtabRashdi pic.twitter.com/XTBHdVKcJj

Given the recent experience of the Heart of Asia Conference, the participants observed that in inter-state relationships, due consideration, courtesy and diplomatic protocol must be observed. Similarly, media should be given access without hindrance to cover all such events.

While promoting a balanced and positive approach in the media of both countries towards improving relations, the dialogue recognised and appreciated the diversity of opinion in the Indian and Pakistan media.

In doing so, the participants recalled the earlier Joint Communiqué of March 10, 2016 on the subject, that urged media in both countries to meet the requirements of objective and professional reporting while upholding the core values and cardinal principles of journalism. In particular, it emphasized the need to avoid sensationalism and negative hype.

The participants highlighted multiple challenges in covering the convoluted Pakistan-India relationship and felt that an enabling environment for free and fair reporting must be ensured.

Neither elected Govt nor media have the power to improve Pak-India relations, says @Tallal_MNA pic.twitter.com/bUd8a5Zl4Y

Underlining the critical need for positive and continuous engagement between Pakistani and Indian media, participants highlighted that, in order to facilitate dialogue, institutional arrangements must be facilitated through the respective professional associations and forums of owners, editors and journalists.

The participants highlighted the continuing issue of the inability of news organisations in India and Pakistan to appoint reporters in each others’ countries. They underscored that lack of access to locations in the other country and obstacles in obtaining journalist visas remain key issues hampering an informed portrayal of each country.

The participants also reiterated the earlier recommendation that requires initiatives in both conventional mainstream media and social media by individuals and enterprises of the two countries to promote an entirely new collaborative, cooperative mindset. They highlighted the potential for positive engagement between Pakistani and Indian citizens made possible by the phenomenal growth in new digital media has enormous potential. At the same time, new hazards have emerged that require further deliberations.

In the session seeking participants’ advice on “How to Positively Take Forward the ‘Fight Poverty’ Agenda,” the participants highlighted that South Asia has the highest incidence of poverty in the world. While each country has specific conditions behind poverty, a distinct role is played by narrow definitions of national security which exacerbate poverty and lead to instability.

Poverty and poverty alleviation are critical issue that must help redefine our security priorities in Pakistan and India @Shafqat_Mahmood pic.twitter.com/uI91ZMPafn

Bizarre overreaction of States and statesmen to media in India and Pakistan; States must be more assertive pic.twitter.com/5ZdfuSELZ8

Shouldn't be approached just as a foreign policy but as a human issue affecting lives of citizens in ?? & ?? @shaistapervaizpic.twitter.com/SmV7LuIySo

The participants also believed that resolution of disputes between Pakistan and India could indeed free up resources for poverty alleviation. They further stressed that poverty offers a critical challenge for both India and Pakistan and both countries should share successful policies and practices in order to alleviate poverty. In particular, media should extensively report on success stories from the other country as well.

The participants also highlighted that the challenge of poverty in South Asia is directly correlated to the size of the population. Effective policies to manage population growth are intrinsic to poverty alleviation.

Upon a news appearing that Im joining Pak-India Dialogue, I got many calls expressing warmth and support @NandMaharia pic.twitter.com/VOwTAY9Bgb

Effective, transparent and corruption-free state spending, and inclusive governance through local self-government, can help to alleviate poverty in both countries. The participants underlined the critical role of enhanced participation of women at all tiers of government in this regard.

They resolved to use their respective links with legislatures and professional organizations in order to project the content and recommendations for action as given in the Joint Statement.