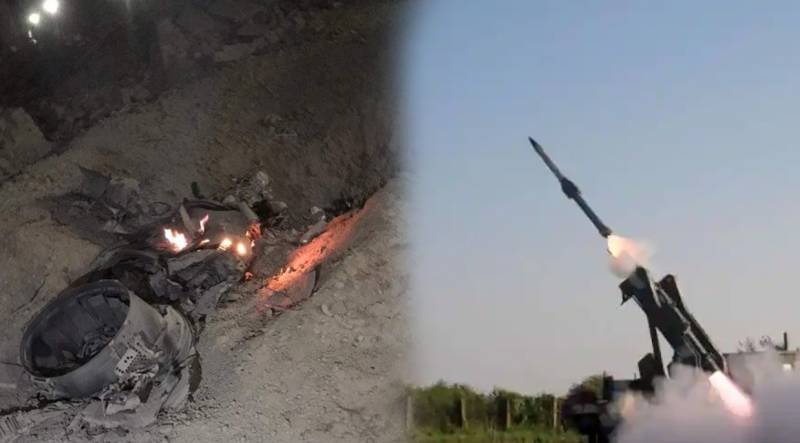 ISLAMABAD – The Indian Defence Ministry on Friday admitted firing a missile into Pakistan.

The Defence Ministry working under the Modi-led government termed the event a ‘technical failure’. A statement issued in this regard cited: “In the course of a routine maintenance, a technical malfunction led to the accidental firing of a missile on Wednesday that landed in an area of Pakistan."

It added that the Indian government has taken serious notice and ordered a high-level court of enquiry. 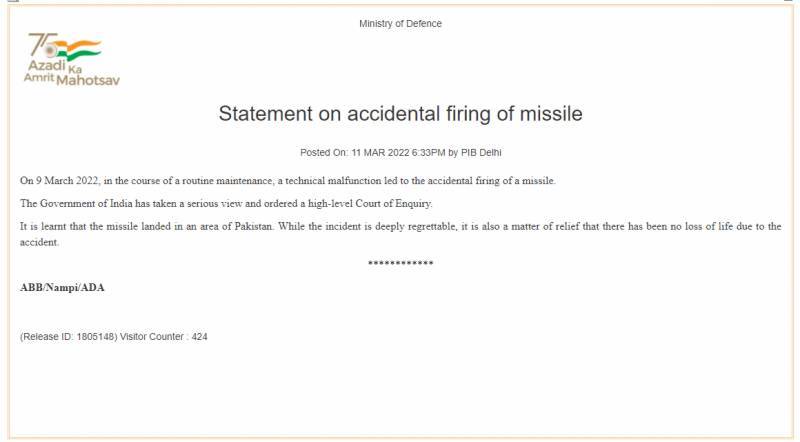 Earlier today, Islamabad summoned Charge d’Affaires of India and conveyed strong protest over the unprovoked violation of its airspace by an Indian origin ‘super-sonic flying object’.

The flying object entered Pakistan from ‘Suratgarh’ India at 1843 hrs. (PST) on 9 March, 2022 and fell to ground near Mian Chunnu city in Pakistan at around 1850 hrs the same day causing damage to civilian property.

ISLAMABAD – The Charge d’Affaires (Cd’A) of India in Islamabad was summoned to the Foreign Office and ...

The Indian diplomat was conveyed that the imprudent launch of the flying object not only caused damage to civilian property but also put at risk human lives on ground. Besides, the flight path of the flying object endangered several domestic/international flights within Pakistani airspace and could have resulted in a serious aviation accident as well as civilian casualties.

The Indian official was told to convey to the Government of India Pakistan’s strong condemnation of this blatant violation of Pakistani airspace in contravention of the established international norms and Aviation safety protocols. Such irresponsible incidents were also reflective of India’s disregard for Air safety and callousness towards regional peace and stability.

Pakistan calls for a thorough and transparent investigation of the incident, the outcome of which must be shared with Pakistan. Moreover, the Government of India is cautioned to be mindful of the unpleasant consequences of such negligence and take effective measures to avoid the recurrence off such violations in future.

On Thursday, Director-General of the Inter-Service Public Relations (ISPR) Major General Babar Iftikhar addressed a press conference in Rawalpindi. The military spokesperson said a projectile entered the Pakistani airspace and caused some damage to surrounding areas after it fell near Mian Channu in Khanewal district.

Spokesperson for Pakistan Air Force Tariq Zia the object “was picked up at a high-altitude of 40,000 feet and was traveling at a speeding axis of Mach 2.5 and ultimately Mach 3.” He said the total distance it travelled inside Pakistan was 124 km, and from the total flight time of 6 minute 46 seconds till it hit the ground, it was in Pakistani territory for 3 minutes and 44 seconds.

RAWALPINDI – The spokesperson for the Pakistan Army said on Thursday that "a high speed flying object" launched ...