Justin Bieber, Ariana Grande team up for track 'Stuck With U' 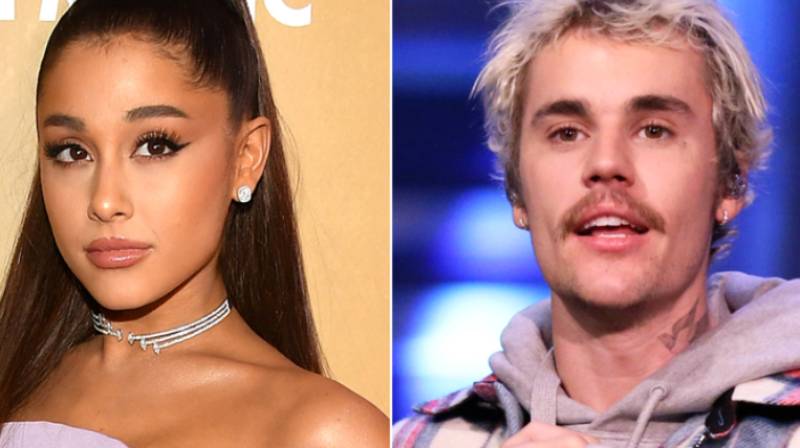 NEW YORK - Pop royalty Ariana Grande and Justin Bieber have teamed up for a duet to raise funds for the children of frontline workers fighting coronavirus. The pair, both 26, dropped Stuck With U early Friday morning, a bubblegum-sweet ode to isolation with close ones.

The now customary shot-from-home style music video features Grande snuggling in bed with her dog — and twirling with a mystery man near the end of the song, who gossip outlets reported is her new real-estate agent boyfriend — as Bieber canoodles with his wife Hailey Baldwin Bieber.

The sugar-coated video also mashes up snippets submitted from fans and celebrities, including Kylie and Kendall Jenner, NBA star Stephen Curry and wife Ayesha, Chance the Rapper and Gwyneth Paltrow slow-dancing with her husband in a plaid bathrobe.

Some clips feature people, often with pets, holding signs thanking health workers, as others include teenagers dancing in prom dresses — most students saw the annual dance typical of the American high school experience cancelled over COVID-19.

“2 babies all grown up finally collaborate!” posted Bieber on Instagram. Grande lent her vocals to the 2015 remix of Bieber’s What Do You Mean?, but Stuck With U is their first single together.

“i can’t fully articulate ……… howwwww happy I am that we waited this long to do this (the duet thing),” wrote Grande.

“being able to lend our voices to this project and collaborating on this has been so fulfilling and i really just love this song so much. grateful to be doing this with my friend.” Proceeds from the song will go to the First Responders Children’s Foundation, which provides grants and scholarships to the children of health care and emergency workers.

The song reportedly is the first release to benefit charitable organizations from SB Projects, the entertainment and media company owned by Bieber and Grande’s manager, Scooter Braun. Braun — who is among those with songwriting credits on Stuck With U — is the music industry mogul in an ongoing public feud with Taylor Swift.

The pop star, who formerly worked under Braun’s wing, has decried his majority stake in the master recordings of her first six albums.