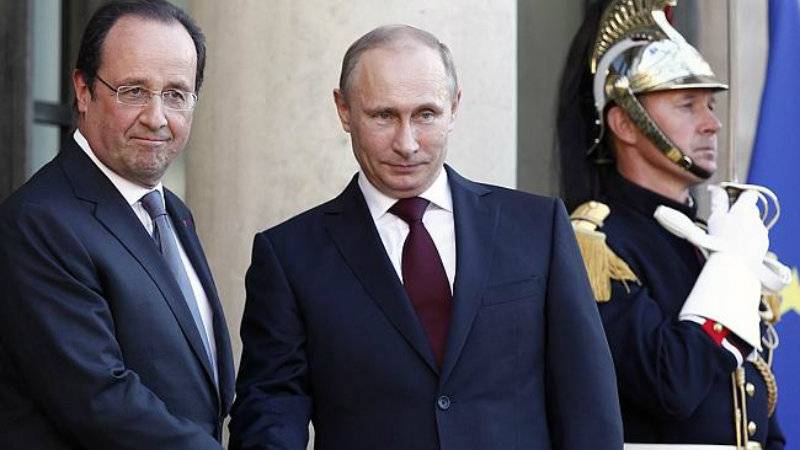 MOSCOW/PARIS - Russian President Vladimir Putin has canceled a planned visit to France next week after President Francois Hollande said he would see him only for talks on Syria - the latest episode in deteriorating relations between Moscow and the West.

Putin was expected to arrive in Paris next week, but the visit has now been postponed after Paris shortened the program for the trip, the Kremlin confirmed.

The development comes amid increased tensions between Russia and France over Moscow’s veto of a French UN Security Council draft resolution on Syria.

Moscow said that the resolution would protect terrorist group Al-Nusra Front, which controls a greater portion of eastern Aleppo, under a pretext of humanitarian relief. An alternative proposal by Russia, which would seek a deal with the group to grant them safe passage out of the city and spare its civilian population, was rejected by other members of the UNSC.

On Monday, Hollande said he was reluctant to meet Putin after Russia blocked a French-sponsored resolution at the UN Security Council, which sought to impose a no-fly zone over Aleppo, Syria.

Putin had been due to meet the French president, and open a new Orthodox church later this month. But after France's government said talks would be confined to Syria the visit was halted, French presidential sources said.

The French presidency had told the Russians Mr Hollande would attend only one event with Mr Putin during the visit planned for 19 October - a working meeting on Syria, the BBC reported.

Does Putin really have proof of US involvement in 9/11?

A spokesman for Putin confirmed the trip had been cancelled, adding that the visit would take place when it becomes "comfortable for President Hollande".

Despite this Hollande has said he will meet Putin at "any time" if it would "further peace".

"I consider it is necessary to have dialogue with Russia, but it must be firm and frank otherwise it has no place and it is a charade. I'm ready to meet President Putin if we can make progress on peace," the French leader said during a session of the Parliamentary Assembly of the Council of Europe (PACE).

Hollande told French TV on Monday that prosecutions over Syria could take place in the International Criminal Court (ICC).

"These are people who today are the victims of war crimes. Those that commit these acts will have to face up to their responsibility, including in the ICC," he said.

Neither Russia nor Syria is a member of the ICC.

Erdogan joins Putin to go against USA on Syrian war

“If I receive him (Putin), I will tell him that [what Russia does in Aleppo] is unacceptable,”  Hollande told French media on Monday, describing Russia’ campaign in Aleppo as a “war crime.”

World is also seeing the cancellation of Putin’s visit for the reason that France acted on a cue from Washington in this situation.

Hollande’s comments stirred a wave of criticism and condemnation from a number of French politicians. Former French Prime Minister Francois Fillon lashed out at Hollande for his reluctance to meet with Putin and stressed that dialog between France and Russia is “indispensable”.

“Francois Hollande himself announced that he will propose the creation of a broad anti-terrorist coalition, including Russia, as he gave a speech in the [National Assembly] after the Paris terror attacks but this [idea] was somehow abandoned,” Fillon said in an interview with radio station Europe 1.

Nicolas Dhuicq, a French MP and a member of the Republican Party called the president’s position “absolutely counterproductive” and said that his statement is “an insult to Russia.”

He also called the present situation “absurd, useless and ineffective,” stressing that the European establishment is “fully dependent on the US foreign policy.”

Thierry Mariani, who is also a member of the Republicans, called Hollande “a US lackey,” who led French foreign policy into a “deadlock.”

“After all, Putin might have touched upon France’s own misdeeds, like the overstepping of a UN mandate to enforce a no-fly zone in Libya, which was used to destroy Muammar Gaddafi’s army, which was done by primarily France and Britain, Harneis said.

Moscow has repeatedly denied attacking civilians, and says it only targets terrorist groups in Syria.

The besieged east of Aleppo has come under intense aerial bombardment since a cessation of hostilities brokered by the US and Moscow collapsed last month.

Diplomatic efforts to revive the ceasefire have so far come to nothing.

The UN has warned that eastern Aleppo, where an estimated 275,000 people still live, could face "total destruction" in two months.