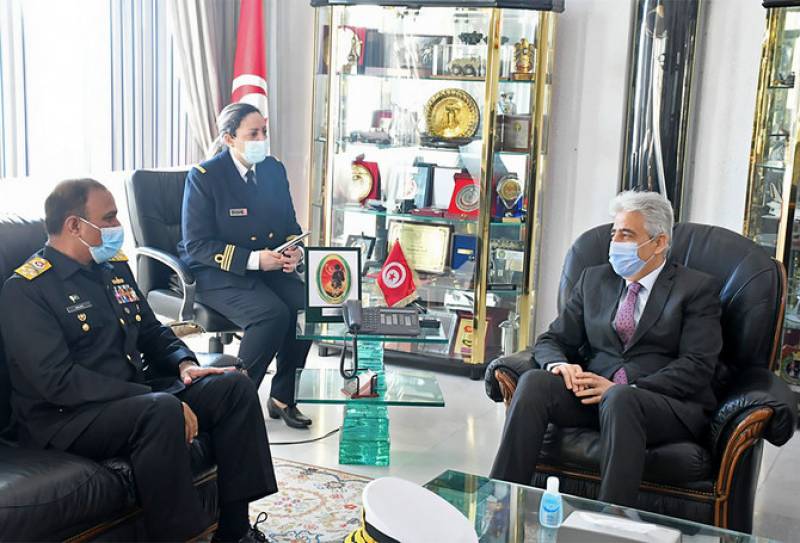 ISLAMABAD – Tunisia has vowed to further strengthen military cooperation with Pakistan, according to a statement issued by its defense ministry.

The statement was issued after Pakistan Navy chief Adm. Amjad Khan Niazi, who was on a three-day visit to Tunis, and Pakistani Ambassador Tahir Andrabi held a meetings with Tunisian Defense Minister Imed Memmiche and Navy Chief of Staff Rear Admiral Adel Jihane at the defense ministry’s headquarters on Friday.

“The Minister of National Defense stressed the ministry’s openness to activating military cooperation between the two countries in areas of common interest, enabling the exchange of experiences to further develop the military capabilities of the Tunisian and Pakistani armed forces,” read the official statement.

The Pakistani embassy in Tunisia in a statement termed the meetings “productive”.

It said that navies of both countries will promote peaceful cooperation in training programs, joint exercises and tech collaborative projects.

Admiral Niazi invited Tunisian counterpart Admiral Jihane to visit Pakistan. It also the naval forces of the country to participate in Naval Exercise titled ‘Aman’ (Peace), to be conducted by Pakistan, in the Arabian Sea, in 2023.

Admiral Niazi also briefed the Tunisian Defense Minister on Afghanistan, situation in South Asia, relations between Pakistan and India with special reference to Jammu and Kashmir and prevailing situation in IIOJ&K.

KARACHI – Pakistan Navy has inducted the most technologically advanced ship PNS Tughril to modernize its fleet in ...