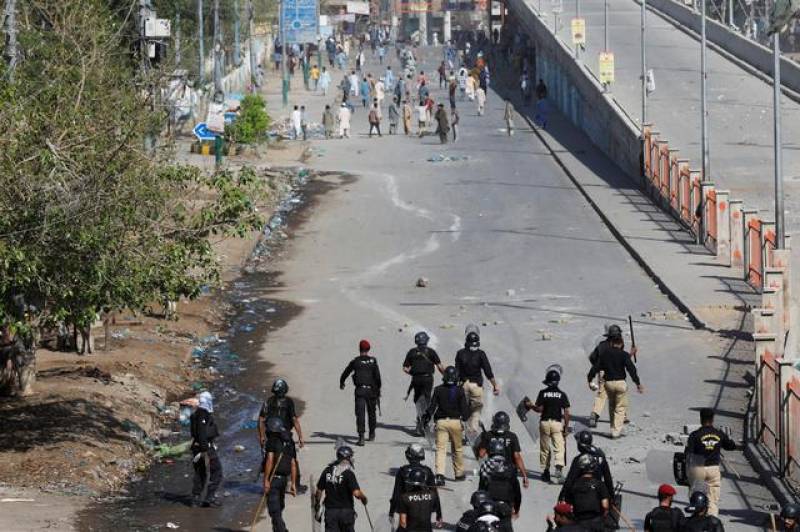 LAHORE – Another police constable has died while 96 other personnel injured in Punjab capital in the clashes with supporters of Tehreek-i-Labbaik Pakistan (TLP) chief Saad Hussain Rizvi amid violent protests that erupted across the country yesterday.

Constable Ali Imran of Shalimar Police is the latest victim of the violence that continues for the second day following the arrest of TLP chief Saad Hussain Rizvi.

The deceased had received injuries in Karol Ghatti area near Lahore Ring Road where supporters of the TLP had clashed with the police personnel. He was taken to Mayo Hospital where he could not survive.

Earlier on Monday, a constable had died after succumbing to injuries sustained in the clashes in the Punjab capital.

According to local media, the injured include two DSPs, five inspectors, and six sub-inspectors.

Protests were also reported in other major cities including Karachi, where at least one protester was killed during clashes with police.

On the other hand, police have arrested several protesters while making efforts to clear roads for traffic. Thousands of people remained stranded in their vehicles for hours.

Earlier today, the city police registered an FIR against Rizvi and other TLP leaders under terrorism and other charges.

The deadly clashes come two days after Rizvi in a statement asked the government of Prime Minister Imran Khan to honor what he said was a commitment it made to his TLP to expel the French envoy before April 20 over the publication in France of depictions of Prophet Muhammad (PBUH).

However, the Pakistan Tehreek-e-Insaf (PTI) government says it only committed to discussing the matter in Parliament.

ISLAMABAD – The Tehreek-i-Labbaik Pakistan (TLP) late Monday night called off its anti-blasphemy protest in the ...