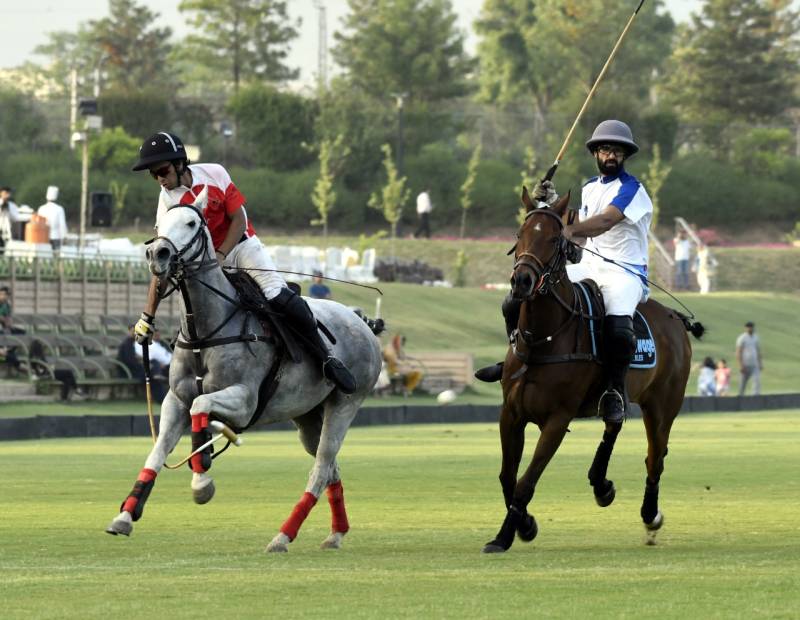 The first match of the day saw dominance of PAF/Jubilee Life Insurance, who overwhelmed Kalabagh by a huge margin of 10-4.

PAF/Jubilee Life Insurance stamped their authority right from the word go and kept on launching attacks on Kalabagh's goal and succeeded ten times while conceding only four goals. Their strategy and game plan were the key things behind their mammoth victory over their opponents.

The hero behind the success was high-flying Hamza Mawaz Khan, who amused the spectators with his superb game and mallet as well as horse work. He kept on scoring for the winning side till the final whistle, thus managing to convert sparkling seven goals. His teammates phenomenal Syed Aun Muhammad Rizvi and Malik Shamsher also played key role in the team's triumph by converting two and one goal respectively.

The losing side, Kalabagh, couldn't settle down after a series of attacked from their opponents, thus kept on conceding goals, taking the tally to 10 goals. Even though some efforts were visible from the losing side, which gave their total tally some respect as Ibrahim Khalil and Abdullah Ijaz scored one goal each for Kalabagh, which had also two goals handicap advantage.

The second match of the day was a closely-contested encounter, where both teams Asean and The Guards gave each other tough time before Asean winning the match by 8-5.5.

The heroes from the winning team, Asean, were Bauti Fenell and Raja Jalal Arslan as both did magic with their mallets and polo ponies and hammered a hat-trick each. Hashim Asad also played key role in Asean's victory by banging in a beautiful brace. The Guards' players also tried hard to finish the encounter as triumphant but their efforts couldn't bear fruit as they lost it by a close margin of 5.5-8. Mumtaz Abbas Niazi was the top scorer from the losing team as he thrashed in three goals while Saqib Raheem converted the remaining two goals for The Guards, which had also a half goal handicap advantage.

Tomorrow (Thursday), the only match of the day will be contested between Kalabagh/Shahtaj and Team Asean at 3:45 pm at Islamabad Club Polo Ground.