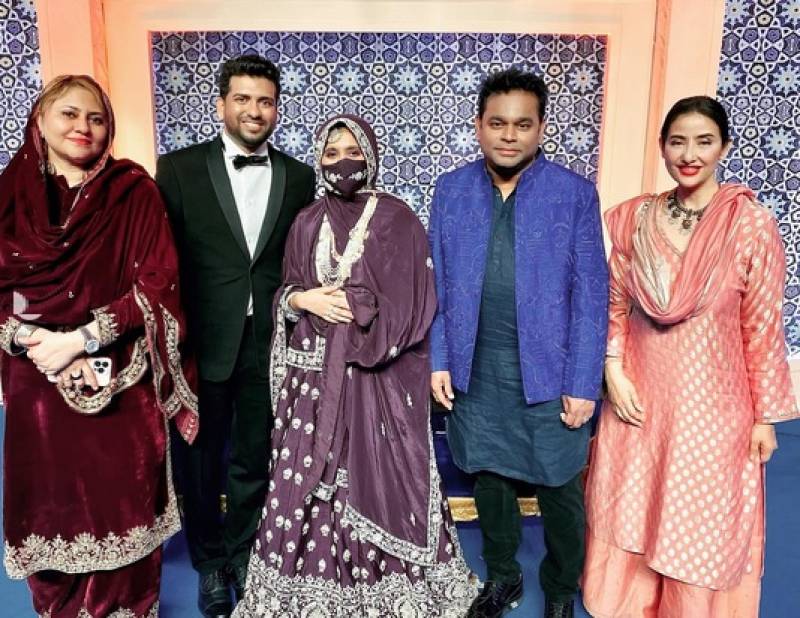 However, the family organised her reception party on Friday and it was undoubtedly a star-studded function as it was attended by Manisha Koirala, Mani Ratnam, Shekhar Kapur, Sonu Nigam and other celebrities.

Manisha Koirala has shared pictures of herself posing with the newlywed couple along with Rahman and his wife. "AR Rahman sir's daughter Khatija's wedding reception was sheer joy... Meeting my colleagues from here really warmed my heart. This celebration has added more to already many lovely memories of Chennai. God bless the newly wed," she wrote.

Yo Yo Honey Singh also shared a picture, giving it caption as: "Best wishes to the blessed couple n congratulations to the whole AR RAHMAN sir’s families n fans !!"

A post shared by Yo Yo Honey Singh (@yoyohoneysingh)

Attended the wedding reception of @arrahman's daughter Khatija - Riyasdeen at ARR film city and conveyed my wishes to the newly-wed couple.

Also wishing dear ARR to heal and unite more hearts with his soulful music, transcending across boundaries and barriers. pic.twitter.com/NmB2UlahDK

In December 2020, Khatija Rahman got engaged to Mohamed, an entrepreneur and audio engineer, in a close ceremony.

MUMBAI - AR Rehman is a masterclass artist of the Bollywood film industry. The music maestro that has established ...